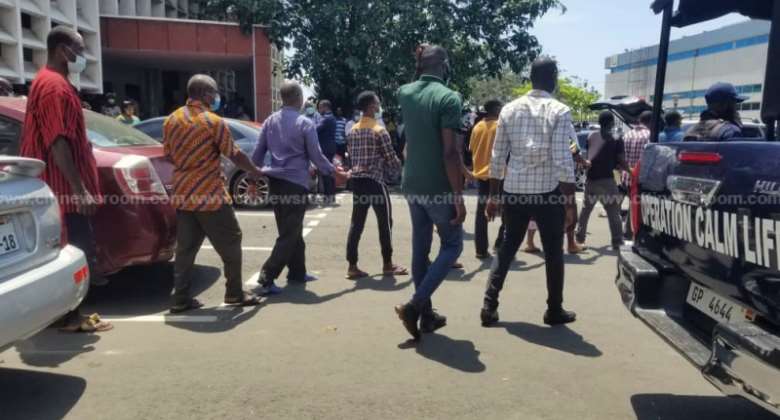 The state has withdrawn charges against 60 persons who were arrested following disturbances in the Volta Region by separatists fighting for an independent state, Western Togoland.

The accused persons, said to be members of the Homeland Study Group Foundation, were arrested in September 2020. They were however discharged by an Accra Circuit Court on Wednesday, October 21, 2020.

No reasons were given by state prosecutors.

The accused persons were rounded up from their communities at different times, arrested and brought to Accra for trial last month.

State Prosecutor, Sylvester Mensah, prayed the Court to grant the State’s application for withdrawal of charges and to discharge the 60 accused persons.

Some of the defence lawyers, however, insisted that the State attributed reasons for its decision.

The lawyers feared that the State had employed a tactic to re-arrest and re-arraign the accused persons the moment they were discharged by the Court.

Failing to yield to the demands of the defence lawyers, the Court dismissed the charges as struck out and discharged all the accused persons.

Members of the Western Togoland secessionist group blocked some major roads leading into the Volta Region on September 25.

This sparked some other incidents in the region including a raid by some secessionists on the Aveyime and Mepe police stations which led to release of cell inmates and the theft of 10 assault rifles.

Police officers were also injured in the ensuing confrontations whilst two persons were killed.

But the following Monday, the group attacked the Ho State Transport Corporation yard and set fire to some buses.

These incidents were attributed to the Homeland Study Group Foundation which wants a part of the Volta Region to be an autonomous country known as Western Togoland.

The Homeland Study Group Foundation, however, denied any involvement in violent incidents.

The leader of the group, Charles Kudzordzi, popularly known as Papavi, said his group had been pushing for dialogue with the government.