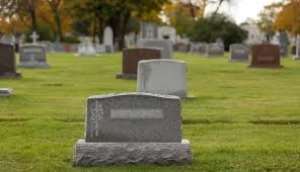 IN LAST week's edition, we learnt that giving proper burial to the dead is not necessarily securing a huge loan to enable the bereaved family to deposit the dead body in the morgue, rebuilding or renovating the old family house, mounting a gigantic billboard of the dead, inviting high-profile personalities, providing mourning clothes or providing assorted foods and drinks all in honour of the dead.

It is also not organizing solemn 'wake-keeping' for the dead where dirge hymns are sung officiated by bishops or apostles, getting the deceased person put in a casket and sent into the church auditorium for bishops to offer fervent prayers of intercession for the salvation of his soul or arranging for men of God to dress in decent mourning clothes and personally burying the dead.

For us to understand proper burial well, we need to dig deeply into the Bible to have accurate knowledge. King Solomon wrote, “A man may have a hundred children and live many years; yet no matter how long he lives, if he cannot enjoy his prosperity and does not receive PROPER BURIAL, I say that a stillborn child is better off than he” (Ecclesiastes 6: 3, NIV).

Biblically and scripturally, a person is considered to have been given a decent or proper burial if his remains or body was properly covered or wrapped in a fine material, for example, fine linen shroud or put in a casket and was laid in a tomb. So, we can say that Christ Jesus received a proper, decent or honourable burial (Matthew 27:50, 57-60). David also received a proper burial (Acts 2:29).

However, a person might be said to have received no burial or improper burial if his body could not be properly covered or wrapped in a fine material, for example, fine linen shroud or put in a casket and could not be laid in a tomb. Very often, such a person would have his body thrown to the fields to be food for animals. Let us consider the passages of Scripture below.

“They will die of deadly diseases, they will not be lamented or buried; they will be as dung on the surface of the ground and come to an end by sword and famine, and their carcasses will become food for the birds of the sky and for the beasts of the earth” (Jeremiah 16:4).

Now, the Word of God makes it clear what proper burial is, and what improper or no burial for the dead is. Solomon said, “…if he (a person) cannot enjoy his prosperity and does not receive PROPER BURIAL, I say that a stillborn child is better off than he” (Ecclesiastes 6: 3, NIV). The expression “does not receive proper burial” may be rendered as “if he receives no burial.”

There is no doubt that there are people, who in very strange circumstances, may unintentionally be denied proper burial or receive no burial. For example, people who are killed and eaten by beasts, drown in water bodies or burn to ashes and so on. So, we can say that the small boys who were cursed by the prophet Elisha culminating in bears devouring them for jeering at him received no burial.

A person who suffers such a fate is what Solomon described as being worthless than a stillborn child. But if the body of a dead person is covered with decent material and laid to rest in a tomb, then, he or she can be said to have received proper, decent or befitting burial. Clearly, proper burial is different from expensive funeral.

In fact, proper burial is not celebrating the dead as most Ghanaians do it where assorted foods and drinks are served. Shall the dead be mourned or celebrated? What is the wisdom in spending huge amount of money to celebrate the dead? How do such celebrations benefit the dead? The dead cannot enjoy any of the foods and drinks served or hear any of the tributes paid; only the living enjoy and hear. Is it not better and wise to celebrate a person who has lived well while he or she is alive?

And we know that when Christ Jesus died, one of His own disciples, Joseph of Arimathea, without any of the apostles, took His body and buried it in his own prepared tomb (Matthew 27:57-60). When John the Baptist died, his disciples took his body and buried it (Matthew 14:12). When Stephen died, the Bible says devout men buried him (Acts 8:2) and finally when Ananias and Sapphira died, some young men buried them (Acts 5:6,10).

In all of these, there is no mention of the apostles or prophets of Christ burying the dead.

Joseph Yamin to clear weeds in all abandoned Mahama projects...
33 minutes ago