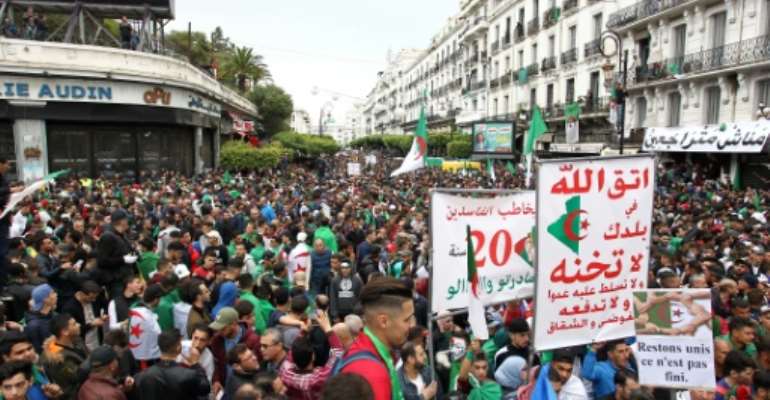 Algerians took to the streets in their hundreds of thousands to demand Abdelaziz Bouteflika's resignation last year, but many were disappointed that a presidential election to choose his successor merely reinforced the status quo. By - (AFP/File)

Algeria is readying for a constitutional referendum that the establishment says will usher in a "New Republic" and boost freedoms, but the opposition dismisses as window-dressing by a repressive regime.

With a month to go before the November 1 vote, many ordinary Algerians -- struggling during a deep economic crisis that has seen unemployment soar -- appear unaware of the technical details of the government's proposals.

"It is yet another coup against popular sovereignty," said Djamal Bahloul, of the Front of Socialist Forces (FFS), Algeria's oldest opposition party.

"The authorities continue to concoct constitutions through technical commissions or experts -- while ignoring the people."

An unprecedented protest movement, known as "Hirak", mobilised from February 2019 and in April that year people massed in their hundreds of thousands to force veteran ruler Abdelaziz Bouteflika to resign after two decades in power.

Tebboune won a presidential election in December, but the protest movement boycotted a vote it derided as a sham and even the official turnout was less than 40 percent.

Tebboune served as prime minister under Bouteflika and is seen by protesters as emblematic of an old regime that they want to dismantle.

Peaceful demonstrations continued, until the need to social distance brought a curtain down on street mobilisations earlier this year.

In a bid to shore up his mandate, Tebboune pledged to revise the constitution -- which Bouteflika modified for his needs -- and allow people to approve or reject proposals in a referendum.

In January, the president appointed a commission of constitutional experts, who held consultations with political parties and civil society leaders.

Abdelmadjid Tebboune, once a prime minister under Bouteflika, won a presidential election that saw a turnout of less than 40 percent, according to official data. By RYAD KRAMDI (AFP/File)

The commission submitted its proposals in March, and the draft changes were adopted without debate by parliament in early September.

The government claims it offers "radical change in the mode of governance" by better separating powers and boosting transparency.

Critics point out that parliament remains dominated by two allied parties who held power under the old regime.

They are the National Liberation Front (FLN), Bouteflika's party, and the Democratic National Rally (RND).

FLN secretary general Abou El Fadhl Baadji touts the constitutional changes as a "qualitative leap" that gives birth to a "New Republic where justice, law and the equitable distribution of the country's wealth reign".

But many opposition supporters see the referendum as a cynical way for the government to appear to bring change while maintaining its power.

"This constitutional revision is only there to safeguard the system," said Ramdane Taazibt, a leader of the leftist Workers' Party, lamenting a continued "concentration of powers in the hands of the president."

Athmane Mazzouz, spokesman for the Rally for Culture and Democracy (RCD) party, said the reforms would change little for ordinary people.

Bouteflika, who suffered a stroke in 2013, ruled for two decades and early last year threw his hat into the ring for a fifth term. By Eric FEFERBERG (AFP/File)

"Each head of state who comes to power tries to carve out his own constitution to give himself more power," Mazzouz said.

"We call on Algerians not to go and vote," he added.

But the opposition are themselves fragmented.

Some parties have proposed a direct vote to elect a constituent assembly.

The MSP, the opposition party with the largest number of seats in parliament -- 34 out of 462 -- has called on its members to take part in the referendum, but vote to reject the proposals.

The party condemns "secular" elements of the reform, including a provision that would shield mosques from "political or ideological influence", fearing this could undermine the influence of religion.

It also objects to proposals to ensure women are protected "against all forms of violence in all places and in all circumstances", on the basis that this would "threaten the private family sphere".

The reforms are set to be put to a referendum on November 1, the anniversary of the start of Algeria's 1954-1962 war of independence from France.