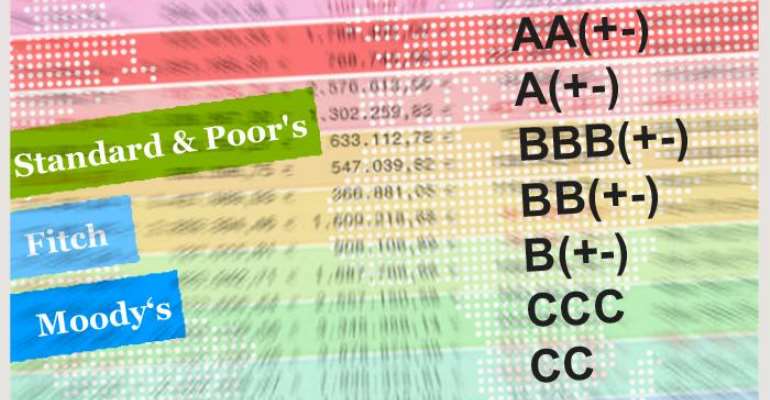 The government of Ghana’s long-term foreign currency sovereign credit rating has being downgraded by Standard & Poor’s Global rating agency. The downgrade from B to B- was based on the deterioration of fiscal position as government increased fiscal expenditure to curb the impact of COVID-19 on both the population and small businesses. This, according to S&P, will exacerbate Ghana’s fiscal challenges as government debt increase to over 70% of GDP and interest payments consuming half of fiscal revenue. In April, all the three international rating agencies cautioned Ghana’s plans to pursue fiscal consolidation more slowly than what the government had previously indicated, warning that it will lead to a higher public debt trajectory.

The government has raised objection the S&P’s downgrade, indicating that it does not agree with it. It is of the view that, rating agencies is punishing it for choosing to prioritize save lives and livelihoods through once-off expenditures and temporary economic adjustments over saving the economy through expenditure cuts. In the words of President Nana Akufo-Addo, the government’s priority of saving lives is more justifiable as an economy can later be revived. In addition, the government contend that the temporary expenditure adjustments have not significantly weighed on the country’s economic fundamentals, which remain strong with high growth prospects. The government of Ghana also criticized the timing of the rating downgrade, citing that it increases the impact of COVID-19 on its economy. Hence, it is calling for rating agencies to “seriously consider freezing any rating actions during global pandemics such as COVID-19”.

In a crisis it is a norm for government to increase expenditure through supporting the vulnerable population and businesses enterprises to counter the impact of the crisis by increasing demand, employment and income. Save the economy by increasing expenditure is not anything out of the ordinary. Both developed and developing countries have implemented these countercyclical fiscal policy measures to address the drag on an economy emerging from slower domestic activity and lower global demand. Under these conditions debt is of little to no concern. In addition, government expenditure on protecting jobs, creating employment and assisting business enterprises is classified as productive expenditure whose net economic output is beneficial to the government. This kind of expenditure finances itself through tax revenue, benefits to the larger economy and social returns.

Ratings agencies have been criticized for influencing domestic policy direction. Historical trends show ratings agencies prefer countries that implement austerity measures, emphasizing on fiscal consolidation, reducing public debt and cutting spending in their methodologies. They portray a message that austerity leads to higher ratings, a policy direction they recommend to all countries in their rating reports. These austerity-orientated policies of reducing government budget deficits through spending cuts and tax increases during a crisis, dubbed “handbag” economics policies, have been proven to be a huge failure at government level.

In my view, the downgrade of countries because of once-off public health, social and business support expenditure in times of crisis is faulty. It is paramount that countries deploy fiscal and monetary tools to limit the impact of the crisis and cushion the economy from shocks. In such circumstance, debt sustainability should be of secondary concern, policy recommendations from international development financial institutions affirms this view. Therefore, S&P’s risk-assessment methodology on Ghana’s fiscal deterioration is inaccurate as the rating agency have noted the significant positive developments in the country’s current account position, external reserves build-up and the unparalleled stability in interest and exchange rates. Compared to its peers, Ghana’s economic growth is still positive despite the COVID-19 crisis.

The popular myth that it is government overspending that leads to high debt levels, widening deficit and crowding out of the private sector has been economically proven incorrect. In contrast to this myth, high public debt is often a direct result of government bailouts, guarantees and contingencies to either state-owned entities or private businesses, to rescue them from bankruptcy. Another driver of public debt is inefficiency in revenue collection by the tax collection agency. Cutting government spending is in fact dangerously self-defeating as it often worsens the public debt level and budget deficit problem that it attempts to solve. In simple terms, it is the sum of government spending and private spending that makes up an economy’s total investment. Low government spending translates to lower levels of economic growth, high unemployment and a decrease in tax generation, making the debt and deficit even worse.

A Cambridge economist, Ha-Joon Chang, likened the cutting of a government budget in a time of crisis to “digging oneself deeper into a hole”.

While it is incorrect for the ratings agencies to criticise the government’s expansionary policy in response to the coronavirus crisis, there is a need to reconfigure the rating indicators from the traditional austerity-based risk factors. The following variables should be considered in rating models instead: