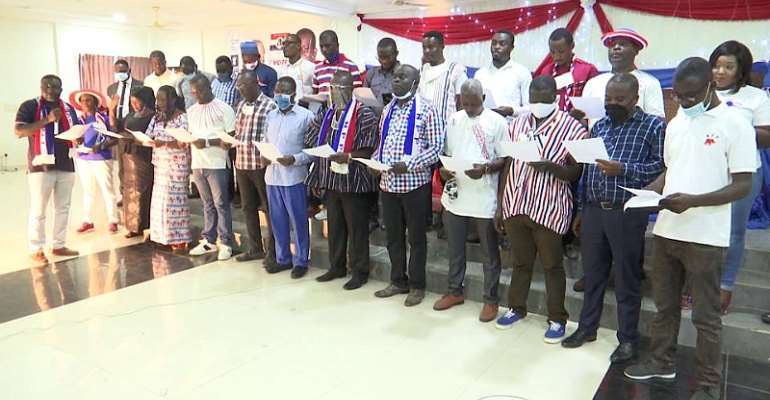 As the 2020 December 7th elections draw closer, the NPP Shama Constituency Parliamentary Candidate, Samuel Ericson Abekah, has led the inauguration of a 29-member campaign team in the Western Region.

As a first-time parliamentary candidate for the Shama seat, Mr. Abekah has said that the campaign launch will focus on selling his credentials and the good works of the great Elephant party NPP.

“The campaign launch is to ginger my supporters and team to extend the campaign to all the 17 electoral areas in the constituency. The business is to make sure that the NPP retains power and also for Lawyer Abekah to retain this seat for NPP. Politics of insult is not acceptable anywhere and I vehemently oppose any attempt by any individual in my team to rain insult on other persons.”

Samuel Ericsson Abekah, the NPP’s candidate for the Shama Constituency

“In politics, it is the trading of ideas, capabilities, and track record that you highlight but not attacking personalities. It is not civil to engage in the abusive campaign so my advice is that anyone who has ever engaged in such an act must stop immediately. Henceforth we are going to sanction any member who finds him/herself in such activities.”

Addressing the campaign team which includes the current MP for Shama, Ato Panford, whom he beat in the primaries, Mr. Abekah called for unity to help the party win by 10,000 votes.

“I know you are here because you have decided to stand for the NPP to easily win the elections in Shama. We have to make sure that the difference between the NPP and the NDC in both parliamentary and Parliamentary would exceed 10 thousand votes.”

“We can do it because there is no enemy among us and we are all NPP matching forward. You know I won the Parliamentary Candidature slot on my fourth attempt but didn't fight against anybody when I lost the first three attempts. I stood with the party and campaigned for the party during the three attempts I lost. So let's unit once again this year to work for a win.”

The MP for Shama, Ato Panford who lost his second attempt to represent NPP in Shama against Mr. Abekah at the party's primaries was expected to be sworn in as a member of the campaign team but couldn't attend.

Meanwhile, the DCE for Shama, Joseph Amoah, who was alleged to be a key supporter of the failed second attempt by Ato Panford was present for the swearing-in as a member of Mr. Abekah's campaign.

He called on all NPP supporters to work for a win.

Mr. Abekah will be facing off with NDC's Gabriel Essilfe who is a two-term MP for Shama between 2009 to 2016.