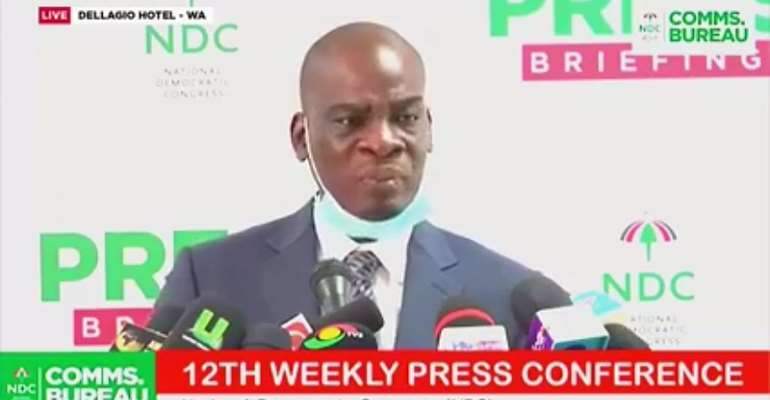 The Minority leader and Member of Parliament for Tamale South, Haruna Iddrisu, has questioned the legality and establishment of Agyapa Royalties Limited as a Special Purpose Vehicle(SPV) to mortgage Ghana's future mineral royalties and long term assets in perpetuity without any regard to its implication on future national revenue streams.

He stated during a recent press briefing in Accra that, "the SPV, Agyapa Royalties incorporated as an offshore company in Jersey, in the Channel Islands, a known tax haven, in exchange for an upfront amount of USD500 million, under the Mineral Development Fund Act, 2018 (Act 978) and it's amendment Act, which strangely, was yet to be assented to by the President in accordance with article 106 of the 1992 Constitution to make it law. The Government of Ghana will own 51 percent of the shares of the company and remaining 49 percent floated on the London Stock Exchange."

He explained that Members of Parliament had less than 4 hours to scrutinize these agreements and ascertain the extent to which they would enhance the welfare of the people of Ghana and in particular it's ramifications on national revenue into the future.

Again, the NDC Minority in Parliament, took a strong position in the national interest that the indecent haste with which these high-stakes agreements were being rushed through the parliamentary approval process does not augur well for the important exercise of parliamentary oversight on an issue as critical as the mortgaging of the gold royalties of the country.

He indicated that, as a Minority, it is their duty that these agreements meet key legal and constitutional requirements before approval and therefore requested for the full complement of requisite documents to guide and facilitate thorough scrutiny and due diligence of the proposed deal in accordance with article 185 of the 1992 Constitution.

The documents requested include the prospectus for the eventual sale of shares in Agyapa through an initial IPO on the London Stock Exchange. The prospectus they say would contain more important details of the deal such as projected cash flows, underlying assumptions and dividend policy.

He further demands the incorporation details for the SPV, Agyapa Royalties, detailed justification for the choice of Jersey, a known tax haven and fiscal impact assessment.

The Minority through its leader stated that a future NDC government will not honour the terms of what they described as, "unconscionable agreement as described by the current Attorney-General."

The Minority believes the deal fails to enhance public welfare.

They argue that per their analysis, Ghana stands to lose billions of United States Dollars in revenue as a consequence of this transaction. This is because annual gold royalties from the mining sector amount to about USD200 million on the average and therefore makes no economic sense to mortgage these receivables to an opaque Special Purpose Vehicle (SPV) in exchange for an upfront amount of just USD500 million.

According to Minority MPs, to ensure that the deal meets best international practices, Parliament must be furnished with periodic reports on the activities of the SPV in the spirit of accountability and transparency.

They expressed worry that generally tax havens are known for their lack of transparency in matters of corporate governance such as disclosure of the beneficial ownership of the shares of companies susceptible to money-laundering jurisdiction by international bodies such as the European Union and United Nations.