I Walk A Proud WINNESECAN 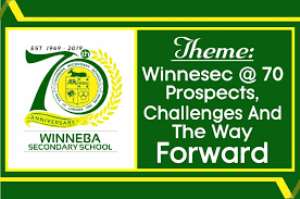 I will like to, once again, congratulate Winneba Secondary School, on the occasion of its 70th anniversary. The 2020 year group of the school is completing this week, and I feel I have a responsibility to publish this message I wrote, which was intended for the 70th-anniversary celebration last year, but which was not published, for a reason beyond me.

I left Winnesec in 1994, as a business student, and as a proud member of Nkrumah House. As a product of the second batch of the then education reform program (JSS/SSS), I had obtained aggregate six with nine ones, and this was at the time when students obtaining the minimum levels of distinction was uncommon.

Obviously I had the opportunity to have chosen to attend any of the so-called leading secondary schools in the country - whether in Accra or Cape Coast. My closest friends and teachers, and well-wishers, strongly opposed to me selecting Winneba Secondary School as my first choice, but I stood my ground, arguing that I am from Winneba, and Winnesec is my pride.

I walked the corridors of the school, under some of the greatest tuitors such as Mr. Yankson, Mr. S. O. Larbi, Mrs Grace Ansah, Mr. Dadzie Bonney, and many more. In the year 1994 while I was preparing to leave the school, I became the recipient of two important academic awards, IBM, and Cost Accounting, with English as my all-time favorite subject.

My greatest inspiration while a student, were Professor Kwesi Yankah, and Mr Yarney, the then Assistant Head in charge of Administration. Professor Yankah was then writing the Woes of Kweitriot. I read him every single week, and he still remains my literary hero, to the extent that I took after his style when I took the Simpa Panyin as my column.

Mr. Yarney hardly taught me, but he occasionally came to class to offer advice. In the face of the dominance of Ga speaking students and staff, Mr. Yarney was one person who always made me feel comfortable and proud that I am a Winnebarian. On a number of occasions he had actually spoken the Effutu language with me.

I left Winnesec a proud son of the deer. I was one of the only nine students, out of the over two hundred, who qualified to enter the university, in the face of what became known as the Harry Sawyerr Mass Failures of the first and second batches of the SSS system.

Upon joining Barclays Bank of Ghana, Kojo Fynn, the immediate past president of WOSA, became my instant inspiration. He worked with the Standard Chartered Bank.

I have since become an entrepreneur, with a number of enterprises such as Challenging Heights, NYCE FM, CH Coldstores, CH Block Factory, Run-Off restaurant, and many more. I have also since had a number of international appointments, including chairing boards overseas, as well as those linked to the United Nations such as becoming the Commissioner of the United Nations Global Financial Sector Commission.

I say all these with measured humility, but also in pride, that while I took inspiration from those before me, my words should become a good energy for those who may yet walk my steps, and out of here, in defense of the sacred deer.

The Winnesec experience has been one of the greatest part of my adult life. I have always been guided by the imperatives of the sons and daughters of Winnesec, my alma mata deer, and never have I forgotten that Disce Ut Labores Pro Patria.

I am proud that in spite of the very tempting opportunities to have attended other well regarded schools, I chose Winneba Secondary School, and I easily say, that, giving the chance, I will choose Winnesec over and over again as many times as the opportunity is given me.

I am a proud Winnesecan, and I am deeply grateful that I walked the ways of the fathers who came before me; Disce Ut Labores Pro patria!