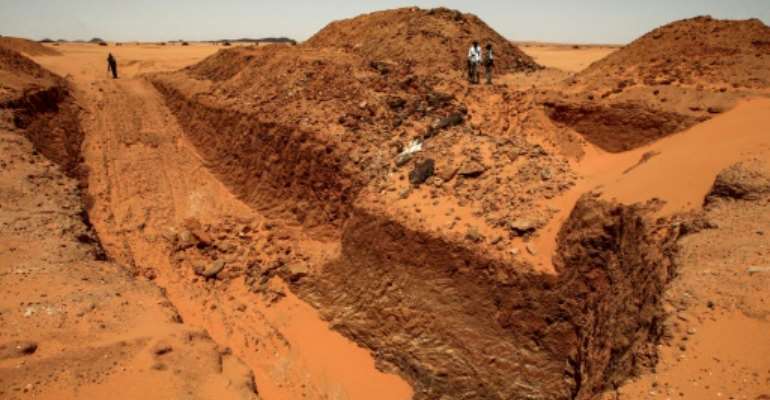 When a team of archaeologists deep in the deserts of Sudan arrived at the ancient site of Jabal Maragha last month, they thought they were lost. The site had vanished.

But they hadn't made a mistake. In fact, gold-hunters with giant diggers had destroyed almost all sign of the two millenia-old site.

"They had only one goal in digging here -- to find gold," said shocked archaeologist Habab Idriss Ahmed, who had painstakingly excavated the historic location in 1999.

"They did something crazy; to save time, they used heavy machinery."

In the baking-hot desert of Bayouda, some 270 kilometres (170 miles) north of the capital Khartoum, the team discovered two mechanical diggers and five men at work.

The rust-coloured sand was scarred with tyre tracks, some cut deep into the ground, from the trucks that transported the equipment.

The site, dating from the Meroitic period between 350 BC and 350 AD, was either a small settlement or a checkpoint. Since the diggers came, hardly anything remains.

"They had completely excavated it, because the ground is composed of layers of sandstone and pyrite," said Hatem al-Nour, Sudan's director of antiquities and museums.

"And as this rock is metallic their detector would start ringing. So they thought there was gold."

Next to the huge gash in the ground, the diggers had piled up ancient cylindrical stones on top of each other to prop up a roof for their dining room.

The archaeologists were accompanied by a police escort, who took the treasure-hunters to a police station -- but they were freed within hours.

"They should have been put in jail and their machines confiscated. There are laws," said Mahmoud al-Tayeb, a former expert from Sudan's antiquities department.

Instead, the men left without charge, and their diggers were released too.

"It is the saddest thing," said Tayeb, who is also a professor of archaeology at the University of Warsaw.

Tayeb believes that the real culprit is the workers' employer, someone who can pull strings and circumvent justice.

Sudan's archaeologists warn that this was not a unique case, but part of a systematic looting of ancient sites.

At Sai, a 12-kilometre-long river island in the Nile, hundreds of graves have been ransacked and destroyed by looters. Some of them date back to the times of the pharaohs.

Sudan's ancient civilisations built more pyramids than the Egyptians, but many are still unexplored.

Now, in hundreds of remote places ranging from cemeteries to temples, desperate diggers are hunting for anything to improve their daily lives.

Sudan is Africa's third largest producer of gold, after South Africa and Ghana, with commercial mining bringing in $1.22 billion to the government last year.

In the past, people also tried their luck by panning for gold at the city of Omdurman, across the river from Khartoum, where the waters of the White and Blue Niles meet.

"We used to see older people with small sieves like the ones women use for sifting flour at home," Tayeb said, recalling times when he was a boy. "They used them to look for gold."

But the gold they found was in tiny quantities.

Then in the late 1990s, people saw archaeologists using metal detectors for their scientific research.

"When people saw archeologists digging and finding things, they were convinced there was gold."

Remote archaeological sites in Sudan are being targeted by people believing they can find buried gold beneath the sand. By Ebrahim HAMID (AFP Photo)

Even worse, local authorities have encouraged the young and unemployed to hunt for treasures while wealthy businessmen bring in mechanical diggers alongside.

"Out of a thousand more or less well-known sites in Sudan, at least a hundred have been destroyed or damaged," said Nour. "There is one policeman for 30 sites... and he has no communication equipment or adequate means of transport."

For Tayeb, the root problem is not a lack of security, but rather the government's priorities.

"It's not a question of policemen," he said. "It is a serious matter of how do you treat your history, your heritage? This is the main problem. But heritage is not a high priority for the government, so what can one do?"

The destruction of the sites is an extra tragedy for a country long riven by civil war between rival ethnic groups, destroying a common cultural identity of a nation.

"This heritage is vital for the unity of the Sudanese," Nour said. "Their history gives them a reason for pride."