A Lack Of Self-Respect (3) Using Jobs, Gates, And Mark 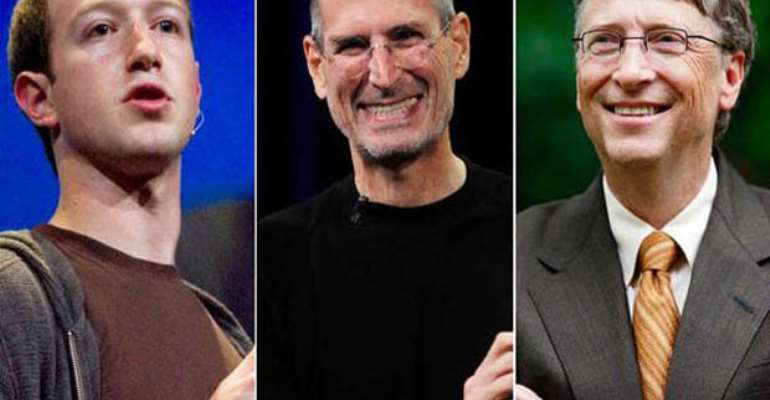 He was a sophomore in Harvard when he built on the idea of connectivity. Connectivity, in this particular case, a fancy word for wanting to know other people's 'business', and reciprocally, having them know yours. It started off Harvard-specific, but soon crossed to other universities in America; it then was to be university-specific, but then crossed to high schools, then to the general public, then companies, and so on. Soon this online platform which—in the wildest of dreams perhaps, was intended country-specific—crossed national borders and found itself everywhere, worldwide

And it began with an idea—not particularly original even at that time, for MySpace, Friendster, had given the world a sneak peak of social networking, but eventually not as grandiosely as Facebook has done it. “I opened up the first version of Facebook at the time I thought, 'you know, someone needs to build a service like this for the world.' But I just never thought that we'd be the ones to help do it. And I think a lot of what it comes down to is we just cared more.” 'Cared more'—easy enough, but that is only half of the story; Facebook—like any company would be—is what it is now because of…funding.

Someone sat down with the slipper-wearing Level 200 boy—devoid of real-life experience, with not a family name or wealth to leverage; a horribly dressed young man with 'nothing' but his own brains to save him—believed in his idea, and invested money into it. Mid-2004, Peter Thiel, an investor made a cash infusion of half a billion dollars into this starry-eyed young gentleman's company. This became the first in the longline of future investments in this gold mine, with some investors begging: “Please, take my money”; some unsuccessfully coaxing Mark into selling. Within a span of just three years, the social media networking site had seen investments, and proposals for acquisition from the likes of Google, Yahoo!, Microsoft, etc.

Since its founding in 2004, the site has revolutionised interconnectivity, social media networking, and the Information Age, placing the 36-year-old Zuck as one of the most influential and powerful people in the world—in fact, dubbed the most influential person of the Information Age amongst a list of 100 industry giants (Vanity Fair). He was dubbed the youngest billionaire (self-made) at 23. He is presently, the only millennial in top twenty billionaires list.

Just a few days ago, he briefly joined the centibillionaires club—a very tiny club featuring Bill and Jeff. With a net worth of 98.6 billion now, there is no doubt he will be rejoining Gates and Bezos soon.

The visionary Steve and his talented pal, also Steve—Wozniak, were 21 and 25 years respectively when they built, sold their first computer, and founded what was then called Apple Computers, Inc.—in Steve Jobs' garage, in his parents' backyard. They had been university drop-outs—Jobs, passionate about electronics; Wozniak, then a self-taught programmer. These two would, from such humble beginnings(both financial and expertise), in the years subsequent traverse a path of checkered successes, never failing in the big picture of 'changing the world'.

And Jobs has indeed revolutionised the Information Age across diverse fields from electronics (PCs, smartphones, tablets), to music (how we listen, make, and sell music), to even the film industry (with the co-founding of Pixar), etc. Apple Inc. is a trillion-dollar company with its influence, geographically: spread across the globe; and its impact: across diverse fields in the Information Age.

Jobs, the hippie, the sometimes barefooted geniuswas, within two years of co-founding Apple Inc., then only 23 years old, a millionaire. Again, after a period of two years, his net worth had ballooned to over 200%–cementing his millionaire status, then a very rare feat for a self-made person.

This mind-boggling success story had, like any other success story, an investor who believed in the dreamer's 'nonsense'. Mike Markkula, became the then Apple Computers, Inc. first investor, lending real-life form to the dream—subsequent investors would follow suit.

All this talk of money and influence calls to mind Bill. In 1975, at age 19, having dropped out of Harvard, Bill Gates co-founded Microsoft with his friend Paul Allen. This programming prodigy quickly rose in fame to become founder of the largest PC software company in the world, having—five years after founding the company—been approached by industry giant IBM to develop an operating system for their PCs. It is quite the daunting task attempting to list Gates' successes, even more so, when one has to summarise them. But you know that should you find a list purporting to name the world's richest people, and find this bespectacled face absent, such a list would immediately and unquestionably lose validity. For the past 33 years, he has been in these lists; for a total of 18 times, he has been number one.

But enough of the money talk, for these people soon realise, in their accumulation of wealth, the inherent absurdity of it all, if the money is put solely to individualistic use. So co-founding the Bill & Melinda Gates Foundation, he has, for many years, had profound influence on global education, global health, science, technology and innovation, etc. Oh, how good it must feel to be in a real position to directly influence the world around one!

All this talk makes me sad. This Information Age is like juju. Its characteristics are: quick and enormous wealth, in the shortest span possible. Out of jealousy, I might have to insist that it is in fact 'sakawa'. That these people are in fact, exchanging lives for these wealth, dabbling in blood money, sleeping with mad women, eating excrements, signing contract with Satan… Jealousy is an ugly, ugly look, isn't it? Yet, these 20th/21st century giants swear that what they do, really, isn't hard at all. They swear that one needs not superhuman intelligence, one needs not have liaised with extraterrestrial beings to be instilled with the ability to also influence the Information Age. But tell me if they have not trapped an alien somewhere from whom they draw such knowledge and inventiveness, thus maintaining a tilt of power, leaning largely towards the White race.

Yes, I'm jealous!—what do you expect?—and you should be too, in fact.

You should be jealous of the fact that unlike your nation, other nations elsewhere have created a culture of innovation and inventiveness—one that is instilled deeply in all citizenries; one that recognises that Person A may have the potential, skill, or knowledge, Person B the resources and wherewithal; one that has taught that it is only natural, and imperative in fact that these two groups constantly seek themselves out; and one that consequently has helped cement these nations—with their nationals—places in top spots of various rankings—of influence, wealth, and power.