At least four dead in I. Coast clashes over Ouattara election bid 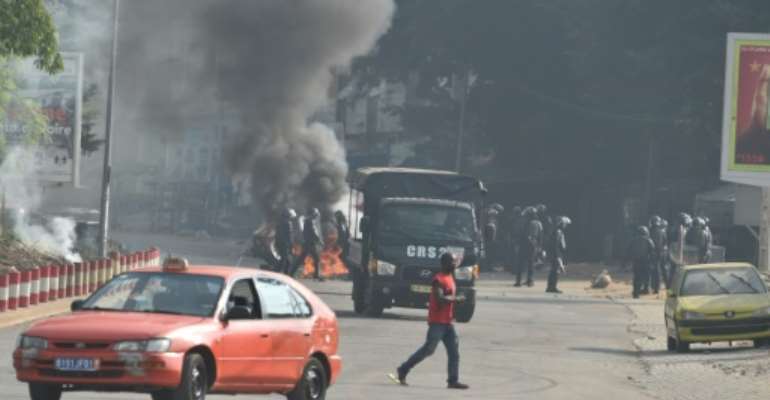 At least four people have been killed in clashes in Ivory Coast following President Alassane Ouattara's decision to bid for a third term in elections this October, sources said Thursday.

"At least three" people were killed on Wednesday in the central town of Daoukro in clashes between Ouattara supporters and backers of rival candidate Henri Konan Bedie, a security source and witnesses there said.

On Thursday, an 18-year-old youth died in the southeastern town of Bonoua, 50 kilometres (30 miles) from the economic hub Abidjan, in violence between demonstrators and security forces, said local mayor Jean-Paul Amethier.

"The police station in Bonoua has been ransacked by angry demonstrators, and the police chief and officers have taken refuge in the courtyard," local resident Herve Niamkey said.

In Abidjan, scattered groups of demonstrators erected barricades and burned tyres in various parts of the city in response to a call from the opposition and civil society groups, AFP journalists saw.

"His candidacy is against the constitution -- we don't want a third term," said protester Herve Seka in Anono district.

In the district of Yopougon, police fired teargas and chased protestors down narrow streets.

A protest gathering several dozen people took place in Port Bouet, a seaside area of Abidjan, while a heavy deployment of riot police maintained order in the upscale district of Cocody, where many top politicians live, including Ouattara.

The authorities announced a ban on protests late Wednesday, in a communique issued by the minister of territorial administration, Sidiki Diakite, and read on state television.

Ouattara, 78, announced a week ago that he would contest the October 31 presidential elections, a move that came after his anointed successor, Prime Minister Amadou Gon Coulibaly, died of a heart attack.

The announcement sparked fury among Ouattara's critics, as he has already served two terms and can only contest a third by arguing that a constitutional change entitles him to reset the clock.

The vote is taking place in a country still scarred by a low-level civil war that erupted in 2011 when former strongman Laurent Gbagbo refused to cede power to Ouattara after losing elections.

The ensuing unrest claimed some 3,000 lives and split the country along north-south lines.

Police arrested a man in the district of Yopougon during protests there. By SIA KAMBOU (AFP)

Daoukro is a stronghold of supporters of Bedie, an 86-year-old former president who last month was endorsed by the Democratic Party of the Ivory Coast (PDCI) as its candidate for the election.

Another candidate is former foreign minister Marcel Amon-Tanoh, 68, who does not yet have the backing of a party.

Gbagbo's party, the Ivorian Popular Front (FPI), has yet to name a candidate. He was cleared of crimes against humanity last year by the International Criminal Court, although prosecutors are appealing the ruling.

Former rebel chief and ex-premier Guillaume Soro, 47, has said he will contest the vote, but he lives in self-imposed exile in France.

Soro has been sentenced in absentia to a 20-year jail term in Ivory Coast on charges of attempted insurrection.