Akua Denteh: Last 'Witch' To Be Murdered In Ghana? 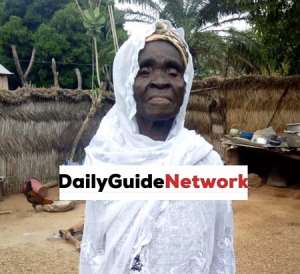 The news of the brutal murder of a 90-year old woman, Akua Denteh, accused of witchcraft in Kafaba, East Gonja in Northern Ghana has sent shock waves across the world. A short video that showed people gathered and watching as some women hit Akua Denteh with objects and eventually set her ablaze underscores the need for effective advocacy against witch persecution in this West African nation. There have been condemnations of this despicable act by the government of Ghana.

The president, Nana Akufo-Addo has expressed his revulsion at the awful killing of Akua Denteh. He noted that the tragic incident had disfigured Ghana. Akufo-Addo urged the police to ensure that justice was done. In his reaction, the regional minister pledged that incident would not happen again. But look, going by the reactions of Ghanaian authorities to similar incidents in the past, this pledge is a vacuous political statement and public relations exercise. Many measures need to be put in place to ensure that Akua Denteh would be the last alleged witch to be murdered in Ghana.

As often the case, whenever people murder an alleged witch, there is a public outcry. Local authorities suddenly spring into action and issue a condemnation. They vow to bring the perpetrators to justice. A few people are arrested, if at all, and prosecuted, and then the matter ends there. After a while, it is back to the business of witchcraft allegation and witch persecution as usual until another accused person is killed. This pattern has been the mode of responding to incidents of witch persecution in Ghana and other places across Africa.

Unfortunately, nothing has been done to dismantle the structures of witchcraft allegations, witch finding and witch persecution in Ghana.

Witchcraft accusations persist in the region, and many of the accused usually flee their communities. Chiefs regard it as part of their duty and tradition to banish alleged witches. In some cases, the chiefs are pressured by community members to expel alleged witches. Occasionally, a few chiefs use the police to resist the pressure, but they do this at so much risk to their lives and legitimacy.

Some of the accused take refuge at some shrine villages popularly known as witch camps. Sometimes alleged witches flee to the witch camps following ineffective interventions of the police, and the Commission for Human Rights and Administrative justice. These state agencies do not have structures to shelter alleged witches while processing cases of witchcraft allegations. In cases where local chiefs are in support of the allegations, state authorities find it difficult to effectively intervene. And even when they do, it is usually too late as in the case of Akua Denteh to save the victims. Witch persecution continues in Ghana because the authorities are unwilling to tackle the elephant in the room, witchcraft belief. The notion that people, especially women, could harm others through occult means is pervasive among the educated and the uneducated in Ghana. The government is reluctant to tackle witch finding and witchcraft exorcizing chiefs, priests, pastors, imams and soothsayers. For instance, people in Kafaba accused Akua Denteh of being responsible for several misfortunes in the community, and a local diviner, called Tindana or Bouiglana, confirmed her as the witch in the community.

In rural Ghana, these witch finding diviners are powerful and influential. People frequently consult them to help unravel and resolve the causes of their misfortunes. People regard them as the mouthpiece of God. The homes of these soothsayers or shrine priests are called the place of truth, and whatever they say is taken to be the truth, the indisputable truth. The people abide by that. This explains why, as seen in the video that circulated online, people in the Kafaba community came out and watched as Akua Denteh was stoned and eventually lynched. Nobody intervened. Nobody tried to save her.

Meanwhile, there is no evidence that any human being can harm others or cause misfortune through magical means. If Akua Denteh had any magical powers as her killers assumed, she could have used her powers to defend herself. She could not have allowed them to assault her as they did. Akua Denteh should have resisted and overwhelmed the lynch mob. But she didn’t because she did no such powers. Or better, she could not stop her killers because such powers did not exist.

Unfortunately, governmental and non-governmental agencies in Ghana have not invested in dispelling superstitious beliefs in witches and occult harm. There has not been any robust national effort to reorient and get Ghanaians to abandon the belief in witchcraft and embrace evidence-based explanations of misfortune. There is no program to retrain the soothsayers, shrines, and other divination experts including, pastors and mallams, and get them to stop witch finding, witch identification, and exorcism. If witchcraft is superstition and witches do not exist, then witchcraft exorcism makes no sense.

Incidentally, the approach of the government has so far been reactive, not proactive. Since witch belief is widespread and witch persecution frequently happens, the government needs to review its strategies and adopt some proactive measures. Ghana has established the Domestic Violence and Victims’ Support Unit as part of the Ghanaian Police, but the regional office in Tamale entertains very few cases on witchcraft. The police said that they needed the victims to come forward and report before they could intervene. That a complainant is needed to leads them to identify and apprehend the suspects.

Like Akua Denteh, victims of witchcraft allegations are usually elderly women who live in remote villages. They do not know where the police stations are located or cannot afford to go and lodge complaints even if they do. So the idea that police wait in their offices for alleged witches to come and report before they intervene needs to be revisited. Ghana’s Commission for Human Rights and Administrative Justice also entertains very few cases because like the police they wait for victims to come and lodge complaints before getting involved. But the death of Akua Denteh and other alleged witches in Ghana has shown that this approach is not working. Instead of waiting for alleged witches to come and lodge complaints, a combined team of the police and human rights officers should take the campaign against witch persecution to the communities.

The team should embark on intensive education and enlightenment of the chiefs and their community members and get them to realize that witchcraft is a form of superstition. That witchcraft has no basis in reason, science, or in reality. The team should urge the Ghanaian public to stop scapegoating innocent women and elders in the communities for the misfortunes that they suffer.

The government should sponsor public health education and science literacy programs, and get the Ghanaian public to embrace evidence-based knowledge. If the government of Ghana had adopted these measures in the past years, Akua Denteh would not have died. That incident of witch bloodletting would have been avoided or prevented. Witch persecution would have ended or at least would have been drastically reduced in Ghana.

If the government and people of Ghana do not put in place effective and proactive mechanisms against witchcraft allegations and witch persecution, these horrific abuses will continue. Let the lynching of Akua Denteh serve as a wake up call to the government and people of Ghana. Let no one get back to sleep again. Let everyone remain vigilant until it is confirmed that Akua Denteh has become the last alleged witch to be murdered in Ghana.

Igwe wrote his doctoral thesis on witchcraft accusations in Northern Ghana and directs the Advocacy for Alleged Witches, which aims to end witch persecution in Africa by 2030