The Pitiable End Of A Decrepit Nonagenarian 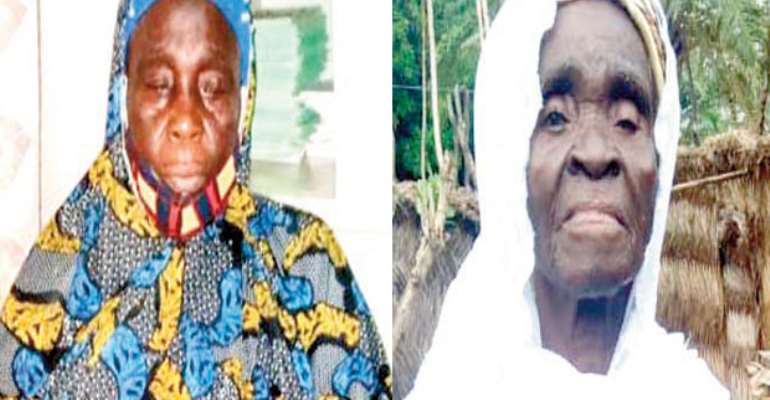 WHAT! INCREDIBLE! The French exclaim 'incroyable'. Barbaric, heinous, abominable, gory, abhorrent, detestable, macabre… A 90-year decrepit, frail, mother of seven murdered in cold blood. Where is our sense of humanity? See young, energetic women flocking the woman and exclaiming Alahu-akbar; (nothing to do with Mohammedanism—and Imam Wakaso strengthens this belief when he calls the barbaric act 'haram'). See energetic young men standing by, looking askance and perhaps telling one another, “Hei, witch, you deserve it; you have turned all the young men here wee smokers; and all the women are unable to get suitable marriages”. And in her weak state, asking her son, “… How are you? They came to pick me up again and beat me. I need water to drink.” Her son, Dominic, tells a sad tale.

A woman called Memuna, born in the 1930s, had not had any school education and had struggled in life at the village close to Kafaba near Salaga in the Savannah Region. She had been whisked from the village to the “south” as a teenager, apprenticed to a “koko” seller. Some layabouts at the Accra Railway Station had defiled her at the age of 13, resulting in a pregnancy. She had had to return to her village where she was delivered of a father-less son. She was espied by a 70-year-old man who had married her at the age of 15 as his fourth wife, and had given birth to four children; and by the time of her husband's death at the age of 80, she was only 25. Now, with five mouths to feed, she used to go to the farm to pick shea nuts to make shea butter, picked firewood from the farm, and collected water from a well three kilometres away. She was bitten three times by a python, a rattle snake and a viper. She survived, because she had a will for survival. She again got married, this time to a truck driver with whom she produced three children, a boy and two girls. The truck got involved in an accident at Amantin while carting charcoal to the “south”, and he died. She was forced to “flee” the village and come to the “south” to try her luck again, this time as a “kaya-yee”. She managed to send money to her mother to erect a two-room swish house. At 60, she decided to return to the village, this time with four father-less children. Only one of the children had been to school: the others had become drug addicts and were engaged as watchmen, fufu-pounders at “chop bars” and as domestic servants…

Meanwhile, Mrs. Gladys Duncan (not her real name) was living in a bungalow bequeathed to her by her late husband, Mr. Timothy Duncan at Ridge, Accra. On her 90th birthday, one of her three children, an engineer, bought her a Mercedes Benz; her second child, a female medical doctor strictly watched her health, always sending her medication; her third child, a woman-lawyer, paid frequent visits to her with her kids who would bombard her with so many questions: Why is your hair so white? Why is your back bent? Why is there a gap in your teeth… and Gladys would only tell them: “By and by you will grow.” The female-doctor would lecture the type of food she should eat and those to avoid; the mild physical exercises to build a strong physical body. The domestic servants attended to her, taught her how to change her diapers and how to massage her and dress her daily.

Akua Denteh's story might not be too different from Memuna's. Then, at the age of 90, a “native doctor” was invited to the village to cast an evil spell afflicting the village – poverty, lack of rain for a long period of time, frequent deaths… and the soothsayer pointed at Akua Denteh. If she deserved to die, why didn't the deity itself kill her? And why should somebody unrelated to her, murder her? You could see the women of Akua's house wailing and throwing themselves down—overcome by grief. “All the world's a stage…Last scene of all…Is second childishness…sans teeth, sans eyes, sans taste, sans everything”.

Witchcraft, hallucinogen and sorcery have a long history—in ancient Greece and ancient Rome. In 789 AD Charlemagne who had imposed Christianity upon the people of Saxony, proclaimed: “If anyone, deceived by the Devil shall believe, as is customary among pagans, that any man or woman is a night-witch and eats men, and on that account burn that person to death… he shall be executed.”

In France, Joan of Arc (Jeanne d'Arc), daughter of a tenant farmer, born around 1412 in the village of Domremy, was burnt at the stake in 1431 in Rouen on a 70-charge indictment, including witchcraft, heresy, hearing from angels and God and breach of the divine law by dressing like a man (cross-dressing). Joan of Arc who led the French force against England in the 100 Years' War, kept brandishing a banner, not carrying a weapon was beatified in 1909 at the Notre Dame cathedral where she was canonised by Pope Pius X in 1920.

Around 1300, the fear of witches spread gradually throughout Europe. Witches were believed to commune with spirits, transform into animals (lycanthropy), gain love by charm, harm enemies, experience euphoria and 'fly to the witches' Sabbath. In the English folktales, witches flew on broomsticks or distaffs or occasionally rode upon unwilling human beings (hag-ride). Witches were depicted as wicked old women with wrinkled skin and tall hats, always clothed in black with warts on their noses and claw-shaped fingernails- riding by night, having secret nocturnal meetings, making sacrificial infanticides, practising cannibalism.

It is sad to see video clips of five-year-old put in shackles and denied food and water at a “prayer camp”, and sometimes with the five-year-old girl held by the hair, tossed up and down, turned round and round by the priest and his cronies – with the girl's mother “praying” and singing—all for exorcising witchcraft.

Well, the Yagbonwura Tuntumba Bore Essa, the Overlord of the Gonja Kingdom, has condemned the atrocious act. The “Women in Law and Development” has made references to constitutional and mandatory provisions: Article 13 of the 1992 Constitution which guarantees the right to life and the prohibition of anyone taking another person's life; Article 15 which guarantees the dignity of all Ghanaians; Article 19 which guarantees the right to a fair trial (and not yielding to trial by ordeal); the provision of Section 1 (b) and 1 (d) of Domestic Violence Act, 2007 as amended; the statutory provision of Section 20 and 23 of the Criminal and Other Offences Act prohibiting the abetment of crime. The First Lady, Rebecca Akufo-Addo, among others, has sent a delegation to commiserate with the family, declaring: “The lynching of ninety-year-old Madam Akua Denteh, is simply abhorrent. It is tragic that in this day and age Ghanaians, especially women continue to suffer such barbaric and human right violations that undermine our quest for gender equality.” Chilling!