Jerry chased from US church 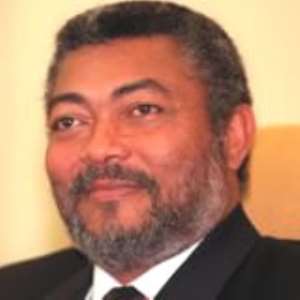 Daily Guide reports that former President Jerry John Rawlings was whisked away from a fiery daughter of the executed former head of state, General Ignatius Acheampong at a Chicago Church last Sunday during a thanksgiving service.

Jerry Rawlings met his match in Victoria, in his attempt to export his abrasive lifestyle in America and was subsequently chased out of the church.

The thanksgiving service held at the Christ for One Church in Chicago, was in commemoration of this year's Ghanafest, an annual festival of arts and culture organised by the Ghanaian community in Chicago.

Rawlings, accompanied by equally the controversial leader of Islam, Louis Farrakhan, stoked up the fire when he launched into his usual tantrums, admonishing the congregation about family values and the sanctity of human life.

The former President is said to have told the congregation, which included members of 15 other churches, as they all combined to have a single service in line with the annual ritual, that life was precious, so they should preserve it.

He charged Ghanaians in America to look after their children because life was too good.

The former President, after asking the congregation to emulate his lifestyle, having married all these years to his wife, found a place for President Bush also in his “sermon” which lasted for about one hour, attacking the American President.

He asked President Bush to learn from Louis Farrakhan, who was also at the church service.

However, unknown to him, his utterances had provoked sudden anger in Victoria Acheampong who despised Mr Rawlings for killing her father.

Victoria, in an instantaneous reaction, stood on her feet and descended on Mr Rawlings, lashing out at him furiously.

She charged on him, calling him a murderer, to the chagrin of the congregation.

Quoting one of the Ten Commandments, "thou shall not kill", she accused the former head of state of murder for his execution of eight military officers, including three former heads of state.

She expressed dismay that after killing her father, Rawlings had the effrontery to stand up and boast about his family.

"You killed my father. What about us?", she charged out and dangled her late father's picture in front of Rawlings, who panted for breath.

It took the intervention of the National Democratic Congress Chicago Branch executives and the chairman of the Ghana Union, Reuben Hadzie to save the former President from further embarrassment as ferocious
Victoria hit him in the face, breaking his glasses in the process.

Four bodyguards of Louis Farrakhan, who also went to Mr Rawlings' rescue, wanted to touch Victoria but were prevented from doing so by other security agents at the function.

Mr Rawlings' rescuers subsequently spirited him away through a back door, after providing a security cordon around him.

The scene brought the church service to an abrupt end.

As Victoria was shouting at Rawlings, the few white people in the church also joined in the chorus, calling him a murderer.