NCA And NMC Our Toothless Bulldogs? 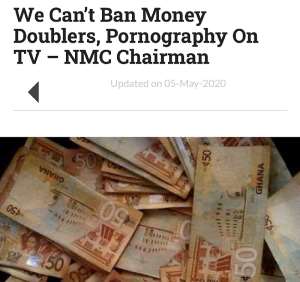 Every society is shaped by what it eats, sees & listens to, fortunately, the FDA is taking care of what we eat and drink competently but when it comes to what we watch and listen to, the NCA and NMC seems to be as weak as a Toothless Bulldog.

Radio and televisions are powerful shaping tools and whatever gets broadcasted must be censored to ensure it has a positive effect on society.

It looks like all the NMC and NCA cares about is their Money but doesn’t care whether the society rots or not.

The only time you hear or see NMC and NCA banning Radio and Tv stations is when they fail in paying their licensing Fees.

Obviously the number of Tv & Radio stations on our airwaves are unnecessarily too many I mean over 90 radio stations only in Accra & Kumasi when in recent past it was only GBC aka GAR.

This has lead to unwarranted competition making radio & Tv stations do abnormal things just for listenership and viewership to the detriment of the society whiles NCA/NMC collect their yearly licensing fees.

Alcohol and Aphrodisiacs were being advertised at anytime especially when sending our kids to school and it took the FDA in 2018 to ban them before 8PM and also ban celebrities completely from advertising Alcohol so ask yourself, what were the NCA and NMC doing all this while or as long as they were getting paid they cared less about the effect of Alcoholic adverts on the society.

As I said from the beginning a society is shaped by what it watches & listens to therefore if you see citizens falling prey to money doubling institutions that scams them in the open then it means they've been watching money doubling activities on TV.

If there is an upsurge in 419 and armed robbery cases then it means they're watching same and again if fornication and promiscuity becomes the order of the day then obviously your soap operas is really doing its Job.

Our major concern today is on the money doubling Juju men advertising openly on TV and its impact on our society.

If a society begins to think they do not need to work hard for money but can just double money then what will stop that society from going to borrow money to double it in order to keep the profit and pay back the borrowed money.

Now what stops the Bank of Ghana from sending our taxpayers monies to these Juju men to double it so we can develop our country well since NMC and NCA have sanctioned and endorsed this money doubling activities on TV.

With such endorsement it is not surprising to see majority of Ghanaians becoming victims to scammers like pyram, US Tilapia, R5, DKM and the almighty MxxxGxxd.

Recently we saw the police uncovering dead bodies who went to double their monies at the shrine belonging to a Jujuman called Powers One and you ask yourself why do we create avoidable problems and waste taxpayers money trying to control self inflicted damage.

Now when citizens started putting pressure on the NMC and NCA, their boss came to ask us why we were questioning the Juju men and not the fake Prophets and that if Ghanaians don't want them we should all agree and make laws against them.

Fact is no body needs any Juju or Fake Prophet on their screens so what is he talking about?

The government who is suppose to supervise the passage of laws also came complaining to the NMC whiles the NMC also tells us they have no law.

My question to NMC and Government is did they wait for Ghanaians to agree before laws against Arm robbery & Co were passed?

Sometimes just sometimes they should credit us with some little common sense.

Lotto number givers all over our radio and tv and you ask yourself that if they truly had the numbers will they really come and give it out? Who sees money and goes out to call people to come for it? Money is a tender called greed and nobody has ever had enough of it so where from this absurdity or as long as NMC and NCA are paid anything goes?

Betting companies modifying money doubling all over the place and now being endorsed by our celebrities.

Finally, is it True that TV stations have to provide content information before they’re issued a license by NCA/NMC but when we the citizens have issues with the content they tell us they the NCA/NMC don’t have control over the content?

Well when the Brain refuses to work, the Body suffers.