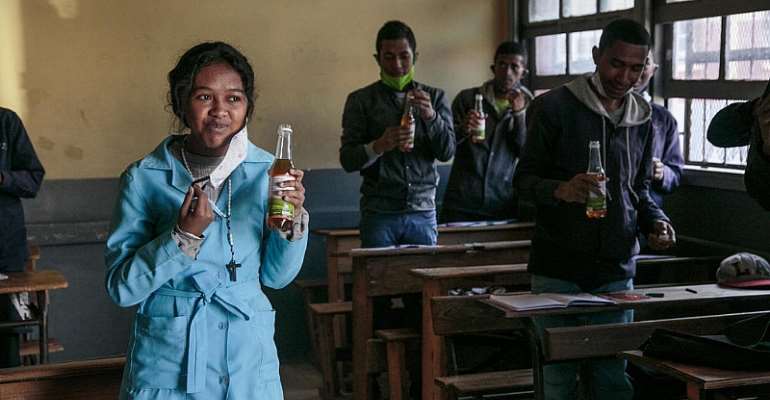 Madagascar's President Andry Rajoelina on Tuesday agreed to send the country's vaunted herbal “cure” for Covid-19 to Haiti, the latest country receiving the artemisia-based concoction, and one of the first outside Africa.

“We're ready Mr President, to help your country,” Rajoelina told Haiti's President Jovenel Moise during a video conference shared on social media, promoting the artemisia concoction as a cure for the coronavirus.

Malagasy authorities have already sent Covid-Organics products to several countries on the African continent, recently announcing donations to its Indian Ocean neighbour, the Comoros, and Chad, whose government sent an airplane to collect boxes of the herbal tea.

Haitian President Moise talked about the number of Covid-19 cases in Madagascar during the video call with Rajoelina, acknowledging that those recovering from the disease had just taken Covid-Organics.

“It's really extraordinary,” said Moise, referring to explanations about artemisia Rajoelina had given France24 during a recent interview.

No data on artemisia
The World Health Organisation earlier in May said it had received no data indicating that Madagascar's artemisia-based herbal tea was an effective treatment against Covid-19.

South Africa's government later said it was ready to assist the Malagasy authorities in testing and analysing the unproven herbal remedy.

The artemisia annua plant produces the artemisinin compound used in drugs for the treatment of malaria. Experts have told RFI that further clinical trials into the use of artemisia are warranted, however it is currently unclear whether artemisia could work as a treatment for Covid-19.

“We have really advanced our research by the way of artemisia,” Rajoelina said during the video chat with the Haitian leader, claiming that the herbal tea was both preventive and curative against the coronavirus.

Rajoelina also referred to artemisia being used as a treatment against a previous coronavirus outbreak. “In 2003, when you had SARS-CoV-1, which was already the coronavirus of the time, we could in fact heal most patients through artemisia extract,” said Rajoelina.

There is no specific treatment for SARS, although vaccines are being researched, according to the World Health Organisation.

Research published in the Antiviral Research journal has suggested that four herbal extracts, including artemisia, could be further explored for use in drugs to treat SARS. However, the basis for Rajoelina's claims appear unclear.

Scientific 'observations'
The Malagasy president said last week that scientists studying artemisia work according to “scientific norms”, although he denied they were carrying out “clinical trials, but rather clinical observations”.

He has actively promoted the herbal coronavirus concoction in discussions with several African presidents. Guinea Bissau agreed to distribute the Covid-Organics tea product to the 15 countries of the Ecowas regional bloc, Rajoelina said on 1 May.

Rajoelina has also encouraged smallholder farmers in Madagascar to switch their crops from rice to artemisia, saying that a tonne of artemisia would fetch 3000 USD compared to 300 USD for rice. He said Malagasy farmers should aim to produce 3000 tonnes of artemisia per year.

Madagascar has registered 326 cases of the coronavirus and two deaths, according to the Africa Centres for Disease Control and Prevention, although there has been some disagreement over the accuracy of testing in the country.