Nigerian Churches And The Rising Influence Of Marine Spirits [Part 3] 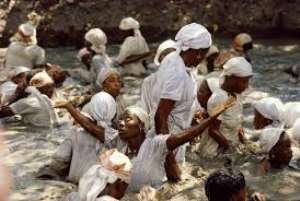 Marine Spirits are gradually penetrating and influencing the behavioral pattern of some churches in Nigeria. Marine spirits are generally referred to as spirits which have operational base in the waters. They are spirits thrown down from heaven (Rev 12 vs 12) and (13 vs 1) and made the oceans, seas, rivers, streams and lakes their abode. Those who are experts in the school of deliverance know that marine spirits are more difficult to detect than witchcraft spirit. The modus operandi of regular witches especially in Africa is very crude, brutal and dastardly. Witches are naturally very impatient-they want to do away with their victim quickly and return back to base.

Marine spirits are patient, subtle and most instances appear very civilized, mannered and cultured in operation. They control the fashion industry and celebrity related matters. A popular Nigerian musician Sir Victor Uwaifo gave insight into his famous album ''if you see mammy water o, make you no run away '' and the inspiration behind it.

Narrating how he met mammy water (female water spirit) on Lagos Bar- Beach, Uwaifo said “I was then an adult working with the NTA Lagos after graduating from Yaba College of Technology and I usually went to the Bar Beach till late in the night. It was during one of my visits that I had an encounter with the mermaid. That melody was really from the mammy water and I was frightened to my bone marrows... very pretty and shiny. In fact, all that frightened me. That's why I said: “If you see Mammy water, never you run away...”

Another popular singer, Oliver De Coque in one of his Ogene Music albums said that ''egwum sin a mmiri, osi na ikuku'' meaning that ''my song is from the waters, from breeze...'' These popular musicians have revealed the source of inspiration of their evergreen and ever fresh music- from the marine world.

Therefore, Lucifer, being the former Chief Musician in Heaven, took his musical skills and that of his singers to the marine world to distribute to those who pays obeisance. Some other musicians in Nigeria have narrated the source of their music and their music are always very melodious-this is the core of marine operations-appealing, enticing, harmless, irresistible and potentially harmful to the soul. However, praise and worship is still central in the service of God.

Despite the subtleties of the marine world, this kingdom is as wicked as the witchcraft kingdom. However, marine spirits, unlike witches, can patiently wait for a prey for years while enforcing a strategic plot of enticement, seduction, entrapment and merciless destruction. The marine kingdom is very rich. Witches are initially more interested in spreading misery than acquiring wealth and when they later realize their state of material lack, they brutally select a victim for destiny transfer; however, marine spirits present instant wealth, influence and affluence as part of their bait for membership.

The marine kingdom are generally strategic in nature, because a lot of their members have been converted due to constant prayers, holiness, deliverance , discipline and word of God in many churches, they devised other means of caging the church in Nigeria. Their purpose being to infiltrate the churches, quench the spirit of righteousness, holiness, contentment, prayer, love and care and replace it with the spirit of mammon, greed, corruption, immorality, jealousy, strife and lack of eternity consciousness. As far as I am concerned, they have captured a lot of churches in Nigeria.

They have consciously and unconsciously packaged some men and women and sent them into churches to lead the pastors, prayer leaders, worship leaders, elders, deacons and deaconesses into sexual immorality. They use all sorts of spiritual excuses to explain away the acts and as such have driven away the Holy Spirit from many churches. Holiness, righteousness, purity, love, care and diligent search of the scriptures have been replaces by confess and possess, dance and possess, dream and possess and claim and possess attitude which is corrupting the originality of the commission of Jesus Christ.

A lot of Evangelical and Pentecostal Christians have condemned the Roman Catholics of worship of relics, religious images and Virgin Mary. The same criticizing churches, filled with believing Christians, have given room to different manifestations of marine spirits and quenched the true fire of God the same manner it was quenched by the early church. That is why Roman Catholics, Anglicans, Pentecostals, White Garment, Evangelicals and their Muslim counterparts in Nigeria join hands to loot the national treasury while still clinging to their religious beliefs.

The rising influence of marine spirits in the churches is noticeable in the city of Abuja, Lagos and Port Harcourt. Lots of young pastors have had course to escape from the church of a super rich, well connected female pastor because this woman whom close friends and workers claim has affinity with water spirits is always demanding sex from numerous young and hungry pastors who throng her church for ministerial assistance and is ready to handsomely reward any accomplice. When one of the pastors refused to continue with the unending sexual demand and signaled intention to quit, the woman of God cursed him and he died.

The pastor's death, under mysterious circumstances, hours after the final altercation with the super rich woman, raised a lot of dust within ministerial circles in Abuja and was reported to local chapter of Pentecostal Fellowship of Nigeria, by friends of the deceased. There is a general consensus that the then leadership of Abuja PFN lacked the courage to confront the woman because of the mouthwatering tithes and offerings from her. This matter occurred in the peak of former president Obasanjo's campaign for Yaradua presidency.

Shortly after that, in 2007, another music pastor, whose father is equally a pastor in his South-South home state, had to flee to another church for deliverance when this woman's son warned the randy pastor of the diabolic nature of the mum( woman of God) whom he is constantly sleeping with. This pastor also had dangerous marine tales about her sugar mummy pastor and I encouraged him to repent and secure himself in God before he becomes a spiritual rag.

This control of the churches by marine powers dated back to the apostolic age when in the letter to the seven churches, Jesus Christ commended the church in Thyatira for refusing the advances and the teachings of the prostitute, (Revelation Chapter 2 vs 18-21) therefore, believers are expected to resist its operation by rejecting its appearance in the body of Christ.

In April 2012 a notable Lagos based Bishop alarmingly told me of a pastor friend who recently patronized the Queen of the Coast and escaped by the grace of God. This Lagos based pastor whose church members have disappeared due to financial hardship, went in search of ministerial help from another senior mentor who has a church of about three thousand members and lots of excess finances. This senior mentor took this young pastor to Lagos bar beach in the midnight for special church growth and financial explosion prayers. According to the traumatized pastor, he saw some pastors he knew in clusters talking in whispers near the parking lot, as they moved closer to the ocean.

The senior mentor then revealed to the younger pastor that the condition for the power he is to receive to transform his church include sexual affair to a soon to appear mermaid and afterwards everything about his church will change. Secondly, he will be constantly sleeping with church members and using their star to maintain the power, he will donate a soul annually, and finally he will be soft on messages of righteousness. The senior pastor explained that all those he saw somewhere near the parking lot have all done it and their churches are moving well and that they still love Jesus except that ministry must move on.

The young pastor was still contemplating what to do when a mighty wave rose up in the sea and a very beautiful girl, stark naked walked out of the deep sea and made for the pastor. This pastor claimed that this lady whose hair reaches the shoulder level was the most beautiful girl he has ever seen and when his manhood was about to respond in admiration he heard a small voice warning him that once he has intercourse with the spirit, his soul is mortgaged forever. He started speaking in tongues and rebuked the foul woman in the name of Jesus Christ; she screamed and disappeared back to the water.

This pastor had to narrate the experience to close confidants including the identity of Men of God he saw at the parking lot. This pastor's story caused some stir among ministerial circles in Lagos and the Bishop was the third notable pastor in Lagos to inform me about it.

There are three types of marine penetration in the churches; the first is where the pastor, priest or bishop is not aware that marine spirits are in operation. This is the most rampart case with Nigeria. Due to the fact that discernment of spirit has been neglected in churches, marine agents can hide under the cover of church and lead people into immorality.

The second level of penetration is where the pastor is aware and does not know how to get out of the situation. Some pastors do not know that they and their flock need periodic special deliverance service and therefore are powerless in the face of marine penetration. A lot of pastors and some bishops have confided in me that they know that such exists in their churches but they are at a loss on how to tackle the menace.

The third penetration level is where the pastor is actually an agent of the marine kingdom. Such pastors brazenly indulge in acts of immorality and they resist any attempt to initiate the true fire of God in the system. They quote scriptures like ''judge not'', ''touch not my anointed'' and ''there is no condemnation to them which are in Christ Jesus'', and present heresies of '' beware of being sin conscious'' to justify why they are condoning impurity in the system. They directly initiate their ardent followers into such kingdoms through a process that involves a gradual return to the vomit, accepting once more what was once rejected.

Nigeria Christians should earnestly ask the Holy Spirit to deliver their soul from such contamination and save their souls from damnation especially when it is perfectly discerned that marine operations exists and deliver the churches from the rising influences of marine spirits.

(Part 3 of this piece is an abridged version of parts 1and 2 published in January 2012 and is relevant now because due to the rising influences of marine spirits, the churches have become powerless and clueless, being ordered about by unbelieving occult and paganistic government officials in the name of Covid -19 lockdowns.)