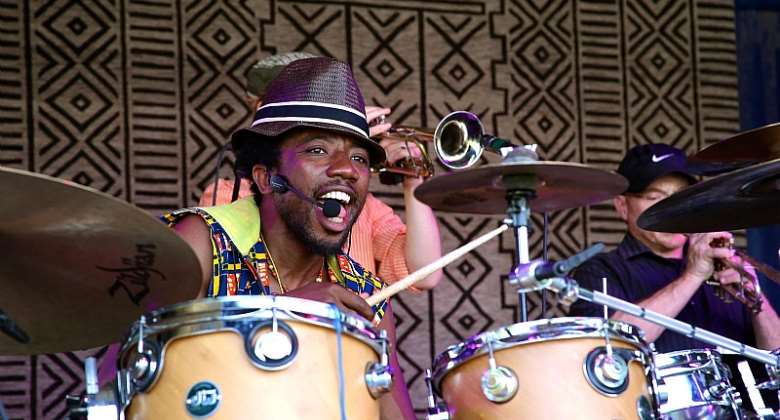 The passion, energy and enthusiasm with which he carries his drum sticks and the pride with which he plays the drums makes him one of the most watched and loved show time drummers.

That is simply the amazing story of Paa Kow, a multi-talented Ghanaian musician currently based in the USA.

ModernGhana Entertainment caught up with him in Accra since he is currently in Ghana with his Manager, Peyton Shuffield, promoting his latest Albums already being played JoyFM and other leading radio stations in Ghana.

He would also be playing for some musicians who have lined up a couple of shows this festive season.

Having played for various top bands and musicians like Kojo Antwi, Tagoe Sisters, Amandzeba, George Darko and Amakye Dede, Paa Kow indeed by all standards shows finesse and a specialty anytime he gets close to the drums.

Paa Kow has an actual drum set to practice with these days. He used to gather and play on old cans at Enyan Denkyira, his hometown and where he grew up, when he realised his interest in drumming at a very early age. He says his mother is still keeping some of the old cans he used to practice with.

He has toured Switzerland, Holland, England, Italy and France with those musicians but the last time an invitation came to travel abroad, it was from the University of Colorado in the United States. He spent ten weeks there working with the university's highlife ensemble and a quintet called By All Means.

The University of Colorado has been inviting accomplished Ghanaian musicians to collaborate with its highlife ensemble since 2000. Previous invited artistes include Agya Koo Nimo, Okyerema Asante, Kakraba Lobi and Mac Tontoh. At 23, Paa Kow is the youngest guest to have taken part in the programme.

Hiplife is definitely not part of what Paa Kow and his friends are planning to record. The drummer finds that style of music monotonous and boring but stated that Ghanaian musicians needed to do more original LIVE BAND at the studios.

"When it comes to Ghana musicians and the style of music they do now which is hiplife, there are too many fusions of beats in the studios which does not show originality and creativity which brings out the hi life in us. Take a look at Osibisa who made it big all over the world, they were doing LIVE BAND and that is why I would advise my fellow Ghanaian musicians to encourage more LIVE BAND recordings even in the studios," Paa Kow emphasized.

According to Paa Kow, if the trend does not change, Ghanaian musicians will only come and perform for only African communities abroad and miss opportunities to perform at high level American and European platforms.

He was emphatic that he does not have a single hiplife song on his ipod and MP3 but has Jewel Ackah, AB Crentsil, other highlife artistes, seasoned jazz drummers as well as popular rhythms from DR Congo, Cameroun and other parts of Africa.

Paa Kow has so far featured on recordings for Yaw Sarpong and a Nigerian musician called Dede. He will soon go into the studio with Amandzeba whom he claims to love playing with because he gets the chance to display his grasp of African grooves when backing him.

Hottest Photo Reports
Catch up with all the political quotes from our politicians.
Advertise here
More Celebrity
ModernGhana Links
Check out rapper Kendrick Lamar's eventful weekend in Ghana
I am worth about 1 million dollars - Tracey Boakye reveals
Cows defecated on me, the rains beat me — Sherifa Gunu shares painful journey to Accra in truck transporting cows
I wanted to be a lawyer growing up — Jackie Appiah reveals
I charge $30k to go on dates — Princess Shyngle
Jesus and my doctors helped me with my enhanced body — Tonto Dikeh reveals
I spend GHc2k on just dresses when I'm booked for events — S3fa
I left to study degree in Business Management in UK — Sony Achiba reveals
'Get closer to him, you will find out that he doesn't keep things at heart' — Asamoah Gyan confirms friendship with Shatta Wale
TOP STORIES