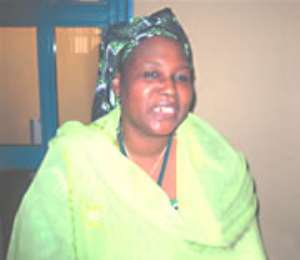 Hajiya Balaraba Ramat Yakubu, younger sister of the late head of state, General Murtala Ramat Muhammed, is one of the respected voices in Hausa literature and movies. The 50-year-old, who has written nine novels, produced a movie and written several movie scripts, gives insights into her creative world in this interview with Akintayo Abodunrin. Excerpts:

Why do you write in Hausa?
I'm an Hausa lady and I'm not educated. I was removed from school at 13 years to get married. My father didn't fancy western education and I think among my cousins, I was the only one that attended primary school. I was in primary four when I was stopped but I struggled to get western education through adult classes and that took me to Bauchi where I did a certificate course. That's why all my writings are in Hausa.

Are you saying your experiences form part of what you write?
Yes, some of the books and some of the chapters in my books reflect my experiences. There is no way I can write without including my experiences because I'm also a victim of some retrogressive cultural practices. We are Muslims and we have rules in Islam for marriage and so on. But sometimes, our culture dominates the religious dictates and culture and religion are different. So, I fight because I want to stress that culture and religion are different. Probably that is why I'm called a controversial writer.

You are called a controversial writer?
Yes, because I tackle issues that some people and writers are afraid to talk about.

Issues like what?
Before, some old people like my mother's age mates think that their husbands are second to their God but I let them know that their husband is their mate, friend and whatever. Before, it was not like that and because that belief is still dominant in the northern states, whenever you touch that area, men don't like it.

You are credited as one of the inspirations behind the popular Soyaya trend in Hausa Literature...
Most of our books, I agree are Soyaya but there are a number of others that are not Soyaya. In my books for example, I combine the Soyaya and other elements but you can't really call it Soyaya because five of them are in the syllabus for Kano State Junior Secondary Schools and even one is being used at the Federal College of Education (FCE), Kano All the books were recommended by the Kano Education Resource Centre. If I have that much Soyaya in it, the education people will put it in the syllabus.

It is said that your books also inspired the Hausa movie industry called Kannywood?
Yes, I translated one of my books, that's Inasonsa Haka into film. Another one, Alhaki Kuykuyo, in the syllabus was adopted it into film by one company. I write many scripts for films and for social orientation programmes in Kano.

Is it because you were forced into early marriage that you now advocate that young girls shouldn't be forced to marry early?
Early marriage used to be common in the North before but now, we want to see our girls occupy big positions like other girls from any part of Nigeria. I don't buy the idea of early marriage because I had to push myself to understand the little English I'm speaking with you. If I hadn't pushed myself, I wouldn't have understood any English. I really desire our daughters in the North to be well educated. I have only two daughters and I want them to have quality education

What caused the crisis in the Hausa film industry?
I think Hausa films are enlightening people, especially Hausa people although I know it's not like books. But I don't see why the government wants to censure us. For me, Hausa film is invaluable in educating the people if we do it the right way.

Does it contravene the laws of Islam?
I'm not deeply into religion but I know that films come from Iran, Saudi Arabia and the people that did it are not Muslims, even the artistes in it are not Muslims. Like I said, I'm not a religious teacher but from what I hear the Ulamas say, Islam doesn't have anything against film making.

Don't you think you have a limited readership because you write only in Hausa language?
I don't think that's true because people come from abroad to see me. For example, a student at Winsconsin University wrote his thesis on two of my books and he came to Nigeria purposely to see me. He brought the thesis and he is now a lecturer at that university so I think even if I write in my indigenous language, I have achieved something. I think I'm ok writing in Hausa but now I see that I have to translate some of the books. I've started with two and I hope to translate all the others too so that I can reach a wider audience.

What are the challenges you face in writing?
One challenge I'm facing is that people call me feminist and I tell them instead of calling me feminist, they should rather see me as half humanist and half feminist so they can get the true picture.

Yes, in some parts I'm feminist and in some parts I'm humanist but it's because in the North we have problems. That's why whenever I write or talk, I side with women. I'm presumed to be too independent and desirous of women being at par with men. That's what they accuse me of and is what I see as a challenge but I'm not bothered at all. All I want is for women to get their rights. That's what my books are about and is what I stand for.

What's your view on the songs and dances in Hausa films?
I don't like the songs and dances because it is not our culture, we have our cultural dances and songs but that Indian style is not our culture. The problem we are having is that the audience like it. The audience like the dancing; if you don't have singing and dancing in your film... For example, I spent about N1.7 million to make a film but there is no singing and dancing in it. Up till now, the jackets of the film are in my room, people didn't buy it. But the person who spent N250,000 and put beautiful girls in it to dance is riding a car when Hajia doesn't even have okada to ride.

What' sort of person was your late brother?
We called him Yahaya. Yahaya is senior brother. All of us were afraid of him because he was a no-nonsense person and he can't talk to you twice. If he tells you no, you know it's no. He was a loving person because whatever problem you have he will sit with you and discuss with you. We really miss him. The gap he left, nothing will fill it. His death is a great loss to the family but we are consoled that Nigerians across the globe love him for his character.