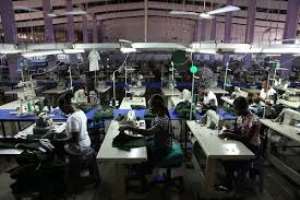 Within less than two decades it will be cheaper to operate robots in US factories than hire workers in Africa, a new report warns.

Falling automation costs are predicted to cause job losses as manufacturers return to richer economies.

Some analysts say poorer countries could be less impacted by this trend, however the Overseas Development Institute (ODI) suggests otherwise.

But its report adds African nations have time to prepare for the change.

"African countries must not shy away from manufacturing, but instead prepare by increasing access to internet, investing in technical skills and promoting technological innovation," said Karishma Banga a senior research officer at ODI.

"If done well, automation can present important opportunities for African countries by improving labour productivity in manufacturing," she said.

It has been suggested that poorer countries will not as be affected by automation because they have less money to invest in it.

"Our research shows that this is overly optimistic. Currently the cost of operating robots in furniture manufacturing is still higher than labour, but this will not be the case within 15 years", Dirk Willem te Velde, director of the Supporting Economic Transformation programme at ODI, said in a statement.

ODI's report, Digitalisation and the Future of Manufacturing in Africa , found that in furniture manufacturing, the cost of operating robots and 3D printers in the US will be cheaper than Kenyan wages by 2034.

In Ethiopia, ODI predicts robotic automation will be cheaper than Ethiopian workers between 2038 and 2042.

This gives the continent between one to two decades to build up its capabilities in sectors less at risk of automation, "such as food and beverages, garments, metals", the report writes.

It advises African nations to expand access to broadband and develop locals' technical skills through vocational training, technology hubs, and a bigger focus on STEM subjects in African educational bodies.

Hottest Photo Reports
Catch up with all the political quotes from our politicians.
Advertise here
More from Career & Money
ModernGhana Links
3 Types of Software Every Student Should Master Before Graduating
Africa's Higher Education Prospects and Challenges in 2022
Shadow Boards are a new reality
TOP STORIES