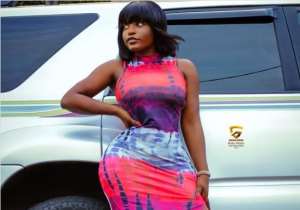 Sensational Ghanaian-based TikTok 'goddess', Ruby Flashy, has made history as the first-ever social media influencer from Ghana to hit 2.1 million followers on the famous app, TikTok.

Ruby Flashy became famous via TikTok after a video of her twerking went viral.

This said video has accumulated over 23 million views since it was uploaded.

In the video, Ruby was seen twerking to her single titled 'vanlova.' The video is just a month old and it’s already making waves.

The video also received a lot of reactions from social media critics with liked it while also having negative comments.

Since then, growth and opportunities have found her and paved the way for her to become one of the top influencers on the video-sharing app.

Ruby’s numbers, both views and followers, escalated and gave her the right as a socialite who can now be described as a household name anytime TikTok is mentioned in Ghana.

The content creator is yet to be verified on the app. Has hope of becoming one of the great musicians in the World has now moved on to become the first Ghanaian to clock two million viewers on TikTok.

By way of celebrating the achievement,

Latest Photo Reports
Catch up with all the political quotes from our politicians.
Advertise here
More Celebrity
ModernGhana Links
I haven't found the right man — Songstress Asa reveals why she is single at age 39
Check out rapper Kendrick Lamar's eventful weekend in Ghana
I am worth about 1 million dollars - Tracey Boakye reveals
Cows defecated on me, the rains beat me — Sherifa Gunu shares painful journey to Accra in truck transporting cows
I wanted to be a lawyer growing up — Jackie Appiah reveals
I charge $30k to go on dates — Princess Shyngle
Jesus and my doctors helped me with my enhanced body — Tonto Dikeh reveals
I spend GHc2k on just dresses when I'm booked for events — S3fa
I left to study degree in Business Management in UK — Sony Achiba reveals
TOP STORIES

No one is above the law except the President - Oliver Barker...
50 minutes ago