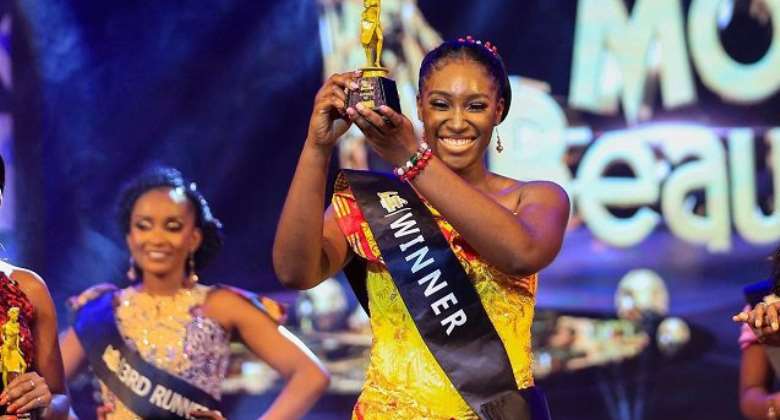 It was a night best described as the finest of everything starting with the glitz, style, glamour, individual brilliance for the constants, extraordinary performances from the lineup of all-female musicians, top-notch production to the exciting audience!

The Ghana’s Most Beautiful (GMB) crown is heading back to the Ashanti Region, the region best known for its royalty, after its representative in this year’s edition of GMB, Sarfoa, was crowned winner in the early hours of Monday 4th October 2021 at the grand finale of the 2021 GMB.

Fourth place went to Upper East Region’s Wedaga with Oti Region’s Akosua and Bono Region’s Mfodwo coming fifth and sixth respectively. It was a night of keen competition at the National Theatre, where as the six finalists tried to outdo each other with spectacular performances in order to walk him with the ultimate.

Manu, representing the West, from Asankragwa to be precise, started it all with her performance which received applause from the crowd. Akosua’s passionate appeal for mentorship for young girls followed before Wedaga, mounted the stage to champion reproductive health education, calling for the subject to be discussed openly.

Setor followed with a performance on the crucial night of the show denouncing mental health stigmatisation, a call that was entrenched by an unprecedented performance by past contestants of the beauty reality show – GMB United.

It was then time for the Bono Region’s Mfodwo who did not disappoint. She put up a great show and advocated for orphans, a call which was well received by the audience and longtime judge of the show who served as a guest judge on the night, Linda Ampah.

The eventual winner, Sarfoa, was the last performer in the first round as she espoused an agenda to demand a proper rehabilitation of the country’s prisoners. All the first round performances were couched around the respective projects to be executed by the finalists.

The second round saw the contestants come in pairs to answer set questions posed by the two masters of ceremony on the night, Cookie Tee and Anita Akuffo. Incidentally, Sarfoa and Setor appeared first, Wedaga and Mfodwo came next and Manu and Akosua followed.

While Setor answered a question on government’s Agenda 111, Sarfoa’s intelligence was picked on the effects of by the Ghana Education Service ’s ban of corporal punishment meted out to students.

Mfodwo also gave her thoughts on women empowerment, her stage partner Wedaga shared hers on marriage. Manu answered a question on agriculture while Akosua’s opinion was picked on the boosting of tourism in the Covid era.

At the end of the night, the crown had to go to one person, as succinctly stated by last year’s winner Naa Dedei Botchwey. And to the Ashanti Region it went, safe for Sarfoa! In addition to the car, cash and crown, she will embark on an all-expense paid trip to Dubai and be a beneficiary of a one-year supply of GTP fabric.