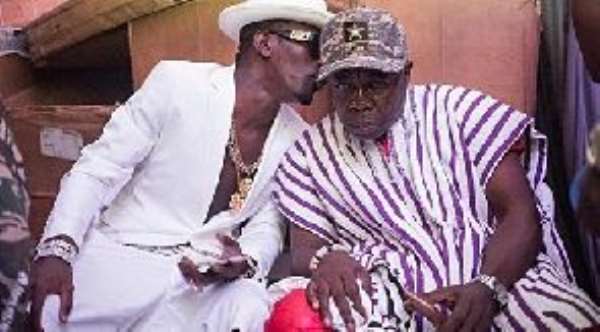 Father of dancehall artiste, Shatta Wale, says he has written a formal letter to the Criminal Investigation Department (CID) to investigate a Kasoa-based prophet.

Charles Mensah Snr said he has petitioned the CID to investigate the prophet who said his son will commit suicide.

The Kasoa-based prophet, Charles Dady, had prophesied that the musician will commit suicide out of frustration.

His prophecy followed Shatta Wale’s threat to burn some churches if a prophecy about his death does not come true by December 2018.

Speaking in an exclusive interview with Prince Tsegah on Showbiz Fylla on Hitz FM, Mr Mensah said he has urged the CID to investigate the prophet.

He showed a copy of the letter he sent to the CID last week.

The father of the controversial artiste, who said, the son is a true reflection of him, urged prophets who have prophecies about Shatta Wale “should get in touch with me” and not go public to make their declarations.

“When you want to churn out any negative thing about [any member of his family] they have to be very careful,” Shatta Wale’s father warned.

“People should give me a break,” he angrily said.

“Why don’t you say anything better than Shatta Wale?” Mr Mensah quizzed, according to a report by Myjoyonline.com.