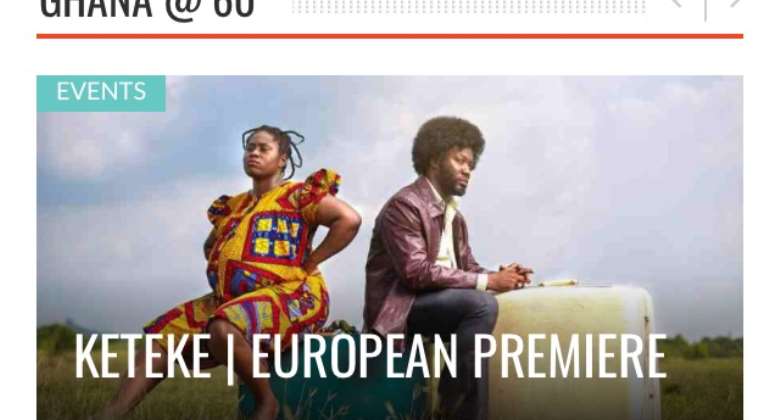 The latest and best of African documentary, feature, experimental and short films will be showcased from this Friday (27th October) at London's Film Africa 2017 festival.

Film Africa celebrates African and African diaspora cinema and is claimed to be the largest of its kind in London.

Now in its seventh edition, this Royal African Society event continues to garner interest from the continent's seasoned and emerging filmmakers.

This year, 38 titles from 21 African countries, including 19 UK, European or World premieres will be showcased.

Ghana in the spotlight
Particular focus will be on women’s stories and films from Ghana to mark her 60th independence year. Last year I posted a blog post that explored Ghana's cinematic contributions and asked why so few Ghanaian films made it to the Film Africa festival. (Click here http://misbeee.blogspot.co.uk/2016/10/film-africa-2016-and-ghanas-cinematic.html?m=1).

Film Africa will spotlight three post-colonial features that capture the spirit of one of Africa’s most vivid and rapidly expanding film industries. The Ghana @ 60 strand features the European premiere of Keteke, the debut feature from Peter Sedufia, a kinetic road trip with a killer soundtrack from Accra-based band, Worlasi; the UK premiere of Leila Djansi’s epic tale about the Atlantic slave trade, I Sing of a Well; and a rare chance to catch one of Ghana’s most celebrated works, Kukurantumi – Road to Accra by King Ampaw, who will be in attendance.

Live performances
Ghana @ 60 will also include an exclusive live performance from RedRed, the exciting collaboration between Budapest based DJ/Producer Elo Morton, of the Hungarian reggae collective Irie Maffia, and MOBO nominated musician, filmmaker and pioneer of Ghana’s contemporary Hiplife music genre, M3NSA, also one half of enigmatic rap duo FOKN BOIS. Performing at Rich Mix on 31 October, this will be the duo’s highly-anticipated first UK gig.

The 10-day event rounds off with a
closing party designed to take you on a musical journey of the best African rhythms and sounds from the 1970s right through to the present day!

Afrobeat to Afrobeats
They welcome New Age Muzik, an Afro-infused collective haling from North London and spearheaded by lead vocalists Kamo and Prince, for a live performance. Taking to the decks will be vinyl collector and selector Volta 45 warming up the crowd with the finest Afrobeat and rising star DJ Stellar (NTS Radio) playing out the night.