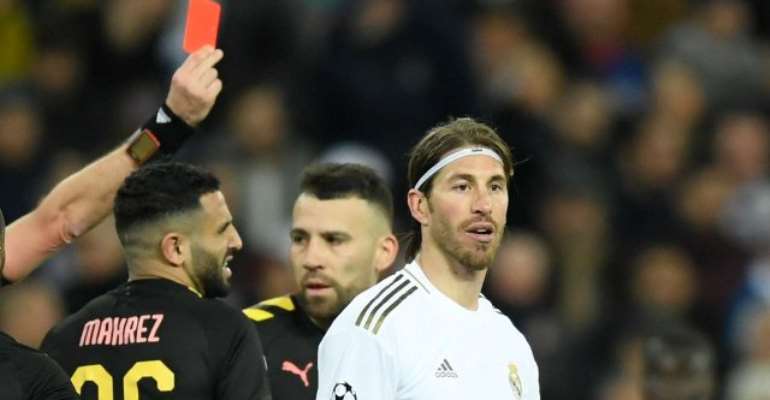 Sergio Ramos claimed his share of a rather unwanted record on Wednesday as he saw red during Manchester City's stunning Champions League comeback.

The Real Madrid captain was largely untested for much of the first hour at Santiago Bernabeu as Pep Guardiola's men took on an unusually cautious approach to the last 16 tie.

With no recognised centre-forward on the pitch and Gabriel Jesus utilised on the left-wing, Ramos was allowed to indulge his attacking instincts, surging into the box shortly after Isco had put the hosts ahead 1-0 and blazing a decent chance over the bar.

When the tables were turned, however, the Spain legend looked shell-shocked, with diminutive Jesus towering over him to win a header and equalise for Pep's charges with 77 minutes played.

Barely five minutes had passed before City completed their comeback, Kevin De Bruyne slotting home from the spot to end the club's recent penalty woes and put the visitors 2-1 up.

And Madrid's misery was compounded when Ramos chopped down Jesus with the Brazilian was clear on goal, leaving referee Daniele Orsato no choice but to show the red card.

That expulsion took the star up to four in his long Champions League career, a tally that many observers might be forgiven for thinking is on the low side given his notoriously on the limit, antagonistic style of play.

Nevertheless, he now shares in a competition record, with only two other players in history earning as many early baths in Europe.

Edgar Davids and Zlatan Ibrahimovic both accrued four during their illustrious careers, with the latter still active at AC Milan - although the Rossoneri last played the Champions League in 2013-14.

If any of that trio is likely to claim the mark outright, then, you would put your money on Madrid's combustible enforcer. Perhaps even more impressively, Wednesday marked Ramos' 26th career dismissal, just one behind ex-Nice star Cyril Rool, who holds second place in the all-time red card standings.

Ramos, though, is unlikely to ever reach Colombian hothead Gerardo Bedoya, who accrued an incredible 46 reds over 20 years for club and country.

In the meantime, Ramos will be a big absence for Madrid in the return leg as he is forced to play out his one-game suspension for a professional foul.

Madrid will play the return leg in Manchester on March 17, knowing they must score at least twice if they are to have any hope of advancing past the last-16 stage.