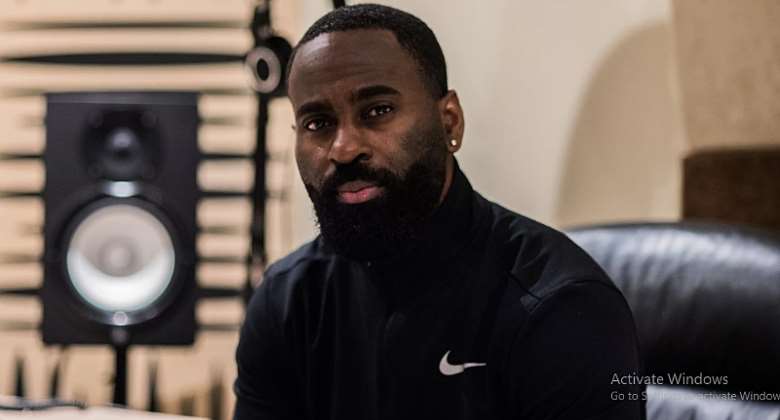 Quincy Owusu-Abeyie (33) proudly shows his mixtape in a studio in Diemen. He leans back in his office chair and softly raps along with his tracks. Many people will mainly know him as a footballer: as a young attacker, he played every defender drunk during the World Cup under 20 in 2005.

His Japanese opponents, in particular, will sometimes scare the awake when they think of his actions. He eventually played for eleven different clubs, including Arsenal, Spartak Moscow and Panathinaikos. Quincy Owusu-Abeyie (33) proudly shows his mixtape in a studio in Diemen.

He leans back in his office chair and softly raps along with his tracks. Many people will mainly know him as a footballer: as a young attacker, he played every defender drunk during the World Cup under 20 in 2005.

His Japanese opponents, in particular, will sometimes scare the awake when they think of his actions. He eventually played for eleven different clubs, including Arsenal, Spartak Moscow and Panathinaikos.

At the age of thirty, Quincy quietly disappeared from the football world after a short period at NEC. What few people knew was that in the meantime he was working on a career in music. Under the name BLOW, he was part of the Amsterdam rap group De Fellas. He always wore a balaclava or a mouth cap, leaving the general public with no idea of ​​his new life. Now that he is releasing his first solo mixtape New Chapter today, he thinks it is a good time to say that he is the man behind the mask.

VICE: Ha Quincy, why do you choose to step out of anonymity?

Quincy Owusu-Abeyie: I have thought about it for a long time. Now that I am releasing my first solo mixtape, I want to show the world: this is me. This is what I am doing now.

Why would you prefer to remain anonymous for this?

When an athlete starts rapping, it is often viewed very differently. Then people soon think: what is he doing? We have another football player there who wants to rap. This way I could take my time and build up credibility first. People first listened to the music through the mask and they did not look at the person I was before.

Was it not difficult to hide your identity all the time?

It was actually already known that I am the rapper BLOW. On my first song with De Fellas, Mazzeltov, I also briefly mention my call sign, Quina. Most people in the Bijlmer knew that it had to be me. I only made sure that I always stood with a mask or balaclava on photos and in clips, but after a performance, I just took off my mask. Then people sometimes asked: "Hey, didn't you just go on an internship?" Then I said with a big smile: "I don't know, man, it could be."

The mask is now part of your image. Will you continue to wear it?

I will probably put it back in some clips. It is dope. It has become a style.

Where does the name BLOW come from?
The point is that I blow money. It's a nickname that I got. We're going to the club tonight and have some money. It has to do with a flashy lifestyle.

Ah, I thought about coke. Do you know the movie Blow?

It is very dope, but it has nothing to do with that.

Did you make music during your career?
In my time at Spartak Moscow, I had a studio in my house. So around 2007 I made some tracks. I just really like music. When I get up I listen to music, when I am in the shower and when I go to bed. There is always music.

Why didn't you release the tracks in Moscow yet?

It was a different time. These days we have Instagram, Soundcloud and you can easily upload your own music. At that time I gave it to friends or people from the neighborhood, and then it went from hand to hand. Nowadays everyone can release music very easily.

When did you start taking it seriously?
Three years ago I received a call from J-Fresh. He had a track and he wanted me on it. We went into the studio. In the end, it didn't become that track, but the song Mazzeltov was the first thing I released with De Fellas. Of course, they also wanted a clip, but at that time I was still playing at NEC. I didn't feel like all those reactions, so I decided to set up a bivouac the first time. Later I changed it to a mouth cap because a bivouac can look a bit grim. This is just a little nicer.

How does it feel to release something that you've made solo for the first time?

As a footballer, you know what you can do and you go out onto the field with elves. When the ball hits my feet, I know what to do. But with music, I now bring a message out. With music, you are actually naked. You have to tell something to the people who listen to your music. At the beginning, it was only about fly shit, but now it is also about things that I have experienced in my life. About my childhood, how it used to be on the streets and love stories. They are really personal things. The album also starts with a telephone conversation with a friend of mine, in which I tell him that I want to stop playing football.

Why did you decide to quit? You were only thirty.

I wanted to go in a different direction. I didn't feel like it anymore. At that time I heard from many family and friends that I still had to try. But in the end, I am the one who has to get up every morning and take to the field again. I am very sober: if you do not want anymore, you have to do something else. As a footballer, you are sometimes locked up in a box. You are a footballer, so you only have to play football. People often expect you to go back to football after your career and start working as a trainer. If I want to do something else after my football career, I just have to dare. Whether I want to make music or work at Albert Heijn.

No hair on your head thinking about doing something in football?

No man. I'm done. I'm going to make nice music. When I told that friend of mine that I was going to quit and wanted to continue in music, he did say: "Brother, you should do it right right away. Immediately take over the game."

In your tracks, it is also about your youth in the Bijlmer.

Is right. People always have the image of the Bijlmer that it is very dangerous and that you can hardly get around it. It can certainly be grim, but for me, it is the place where I feel safe. I have many friends there and I know every corner of the Bijlmer. I have many beautiful memories. We always played football on the street until late and hung by a field. There was also such a stall, where we could buy fries, frikadeller and things like that. It was just really nice, the vibe was good. Or as they would say today: it was really lit. I have seen the beautiful side of the Bijlmer, but also the other side.

Tell?
I remember coming home as a nine-year-old guy, and a junkie was injecting heroin into the stairwell of our flat. Things like that also come back on my EP. One of my tracks is called Role Models. There was no Ronald de Boer type around in our neighbourhood who said: "With football, you have a future." My role models were the money makers of the block. The street men driving around in horrible cars. That was then the shit for me, later I grew older and I made other choices. So the neighbourhood has two sides, but I am especially proud that I come from the Bims. Conversely, I hope to make the people from the neighbourhood proud. First as a footballer and now as an artist.

Which Dutch rappers do you think is fat?
I like to listen to Frenna, Lijpe, Adje, Hef and Henkie T. Since I make music myself, I try to listen to everyone. This way I try to feel a bit and to measure what I have to bring as an artist, in order to ultimately sound different from the rest. In the end I listen the most to my own men, De Fellas. We now all do our own thing solo. I hope that we will make a joint tape again in the future.

What do you think of Memphis as a rapper?
It is very different because he raps and sings in English. But I'm not going to judge him for his music. He is still very young and is still in the middle of his football career. People are going to be critical, but he just does it. Memphis plays for the Dutch national team, at Lyon and has carried the holy number 7 at Manchester United. He's a superstar. It is not easy to release music. He has the guts to do it. I think that is very dope of him.

What does your life look like outside of music these days?

I do have a relaxed life. I regularly go on vacation to America. Then I go with friends to Los Angeles, New York or Miami. Then we enjoy life. Nice breakfast, the sun is shining and then we get in a luxury car. That is really the lifestyle that I love. I also travel a lot with my good friend Mbark Boussoufa and am also regularly with him in Qatar, where he plays. Life is good. Furthermore, I sometimes play football in the Bijlmer in the fourth class at SV Robinhood. Steven Pienaar is also a trainer there.

Do you restrain yourself a bit with those pots in the fourth class?

Haha, every now and then I show you what I have at home. Then I just throw those actions out.

You have now disappeared from the football world for three years. How do you look back on your career? I'm satisfied, man. Sometimes I hear I could have done more, but I don't regret anything. I have had great clubs and have been on the pitch with fantastic players. I played with Dennis Bergkamp, ​​gap. He is legendary. Henry, Van Persie, Viera, Pires, you name them all. I'm just happy with my career. It's fine this way. Now it's time for a new chapter. Now I am BLOW, the artist.

You can listen to New Chapter here: