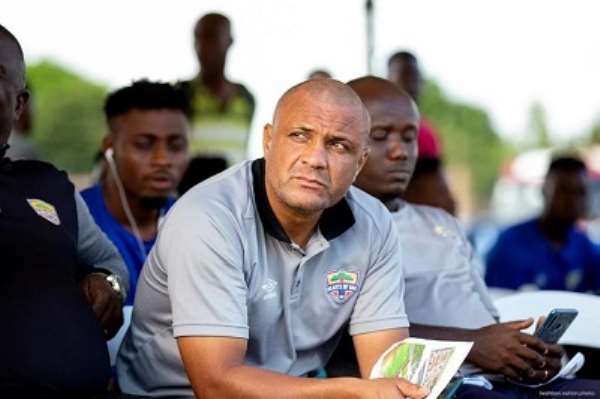 The Management of Accra Hearts of Oak feel slighted by what they described as deceit by Coach Kim Grant over his inability to produce his License A a year after securing the Hearts coaching job, an official of the club has disclosed.

Prior to his appointment in November 2018, the coach was said to have assured the club that he had completed the UEFA license A certificate course awaiting the award of his certification. This according to a source close to the club compelled management to hand over the job to Grant.

Unknowing to management, the source stated that the coach had not obtained any certificate because almost a year after waiting the coach was unable to produce his license despite assuring them it would be ready soon.

“Initially he told us he has a license B and that he has sat and passed the examination for the license A and based on that he was giving the job thinking that within a short period he will get the certificate.

“Then a whole year past, no certificate has come and later he told us that there was something he still has to do and he has done that now and within 30 days the certificate will come”, the source hinted.

This assurance, according to the source, encouraged the GFA to pass him, hoping that within 30 days Coach Grant would be ready with the certification.

But after the 30 days elapsed without Grant producing his certificate, the Ghana Football Association wrote threatening to sanction Accra Hearts of Oak if their coach did not meet the required license A needed to coach a premier league team.

“Based on that, the FA also gave him the benefit of the doubt. Now the certificate hasn’t come and a couple of days ago the FA wrote to us that if by the end of this month the certificate A doesn’t come then Hearts shall be sanctioned.

“It will be stupid on our part to sit down unconcerned so we had to take a decision than to wait for the whole club to be sanctioned”, the source intimated.

According to the source, the coach who pockets about $10,000 each month had also not displayed any depth of knowledge in the job and even if he was able to secure the certificate now there was no way the 47-year-old coach will be re-engaged by the club.

When contacted by the Graphic Sports, Coach Grant said he was not granting any interviews to the media.