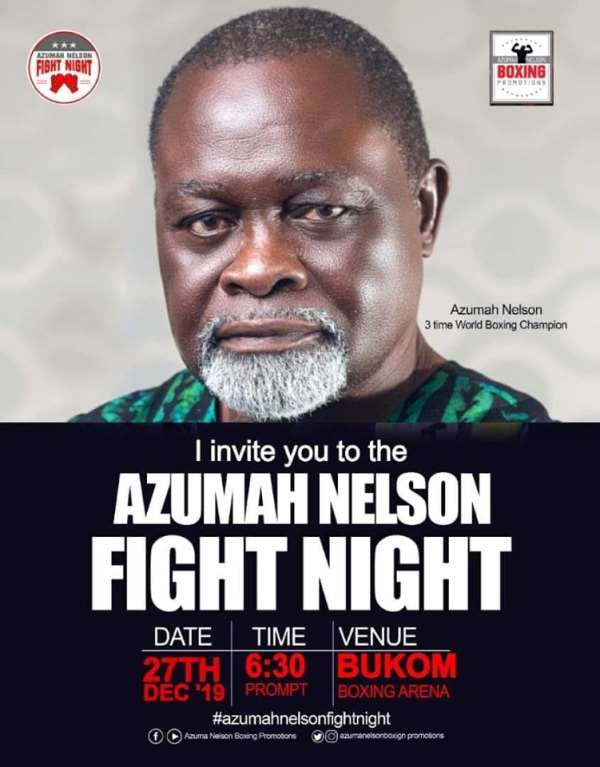 Azumah Nelson Promotions are set to thrill patrons of the Bukom Boxing Arena in Accra Ghana with another spectacular edition of the series dubbed the "Azumah Nelson Fight Night" come Saturday the 27th of December, to crown the year 2019.

This edition of the series is christened "Year of Return" as an integral part of events marking THE YEAR OF RETURN as is set to attract many people from the diaspora, already in Ghana, and some yet to arrive, to be entreated with the great Ghanaian boxing tradition.

The former three-time world champion, popularly known as ‘The Professor,’ Azumah Nelson, whose prestigious boxing promotional event has come to stay, after many years in the business, but undoubtedly got it's the biggest breakthrough in terms of commercial branding and prestige when the CEO of Rite Multimedia, now the manager of the legend Azumah Nelson, Mr Yaw Sakyi Afari, took over from the Henman promotions.

Yaw Sakyi Afari without a shred of contestation is one of Ghana’s finest young businessmen, veteran Broadcaster and Sports Entrepreneur with such an apt marketing acumen which arguably is second to none, he indeed has drastically and strategically positioned the brand Azumah Nelson Promotions and the Azumah Nelson Fight Night.

In July 2018, Azumah organized a fight night to celebrate his 60th birthday at the Bukom Boxing Arena. This event brought together fighters from highly rated gyms in the country to fight contenders in their divisions.

The big occasion ushered in some big dignitaries and boxing gurus including Nii Lante Vanderpuiye and Nii Amarkai Amarteifio who are two former sports ministers, Ian Walker the British High Commissioner to Ghana and Peter Zwennes the president of the Ghana Boxing Authority, were just but few that graced the occasion.

As a culture eliche, the next Azumah Nelson Fight Night billed 27 December promises to go down as one of the very best in the series as organizers promise to bring back the “Ghanaian boxing tradition” of pump and pageantry come fight night.