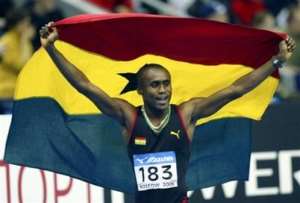 The 18th edition of the Commonwealth Games open in the Australian city of Melbourne tomorrow where 70 other countries will be chasing medals in over 24 events.

For Ghana, overwhelming attention will no doubt, be on long jumper Ignatius Gaisah and sprint king Aziz Zakari as among the favourites to win medals.

At the moment Zakari is among the best-ranked sprinters in the world, ranked second to world champion Justin Gatlin of the USA in the men's 100m, while Gaisah is also second in world rankings and is already on the verge of taking the top spot.

Apart from their current standing in world rankings, the two have also been consistent in their performance, even though Zakari has not got the desired results to show for his exploits.

For Gaisah in particular, his performance has been overwhelming. Four years ago, he was literally an unknown name in international athletics, unable to make the qualifying mark for the 2002 Commonwealth Games in Manchester, The United Kingdom.

This time around Gaisah is attending the event as the favourite to win the gold in the men's long jump. He is doing that with his best indoor times of 8.38m and 8.30m recorded in the IAAF World Indoor Championships in Moscow over the weekend.

Consistently in the last four years, Gaisah has gone from a nobody to the second-ranked long jumper in the world — a feat achieved on the steam of improving a national record from 8.36 to 8.38m, a gold medal at the 2003 All-Africa Games, as well as a silver at the 2005 World Athletics Championship.

Apart from these achievements, Gaisah has greatly improved upon his jumping techniques, no longer intimidated by the great jumpers who compete with him.

For Gaisah, his closest rival will be South Africa's Godfred Mokoena Khotso, ranked eighth in the world and who finished fifth at the World Indoor Championships, with his best jump of 8.01m.

Indeed, of all the athletes attending the Games, Gaisah is the surest bet for gold for Ghana, even though sprint king Zakari is also likely to grab a medal.

Zakari's events, the 100m and 200m, will be a tight competition as the likes of men's 100m world record holder, Asafa Powell of Jamaica, 2003 world champion, Kim Collins of St Kits and Nevis, ranked fifth in the world, and other fast runners from the Commonwealth will all be in attendance

However, Zakari, whose second position on the world ranking list is the highest for any Ghanaian international sprinter, has promised to break the jinx of not winning any medals that has surrounded his over 10 years of active participation in international competitions.

Ghana's Robert Martey will also try to draw inspiration from Gaisah and attempt winning a medal, while Clement Agyeman and Eric Nkansah join Zakari in the sprint competitions.

Since 1998 when Raymond Narh won gold at the Kuala Lumpur Games, Ghana has yet to win any medal in boxing, even though boxing used to be Ghana's stronghold for medals in the past.

Ghana's medal chances in the women's event will be greatly affected by the absence of heptathlete queen, Margaret Simpson, who is out of competition because she is pregnant.

Simpson, who won heptathlon bronze at the Manchester Games, had planned to improve upon that performance but her pregnancy ruled her out.

In her absence, the onus will be on sprint queen, Vida Anim, and Akosua Serwaa, the middle distance runner, to make Ghana proud.

Even though Anim made it to the semi-finals in the last event, she was unable to break through the heavy presence of the Caribbean sprinters who form the bulk of the best female sprinters in the world.

This will be their second Games and it is the general expectation that their consistent appearances at international events have given them the necessary experience to impress in Melbourne.