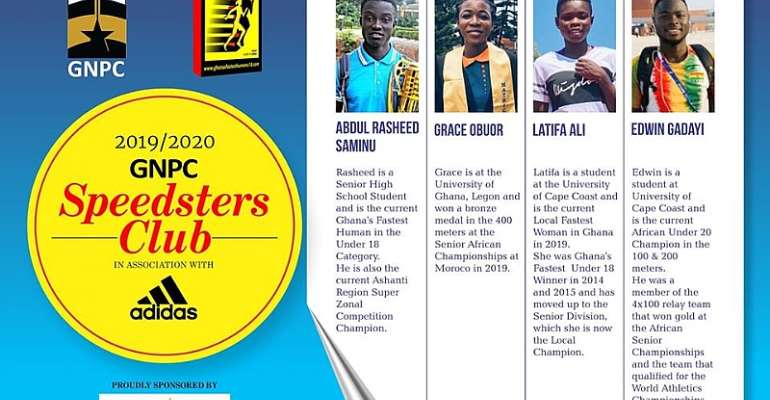 Four new inductees for the GNPC Speedsters Club for the year 2019/2020 have been announced after a successful season.

Rasheed Saminu is a Senior High School student and current Ghana’s Fastest Under 18 champion. He is also the Ashanti Regional Super Zonal winner.

Grace Obour is at the University of Ghana, Legon and won bronze in 400 meters at the 2019 African Games in Morocco.

Latifa Ali is a student at the University of Cape Coast and is the current local fastest woman in Ghana in 2019. She was Ghana’s Fastest Under 18 Winner in 2004 and 2015 and has moved up to the Senior Division, where she is now the Local Champion.

Edwin Gadayi is a student of the University of Cape Coast and is current Africa Under 20 Champion in the 100 meters and 200 meters. He was a member of the 4x100 relay team of Ghana that won gold at the 2019 African Games in Morocco. He was also a member of the team that represented Ghana at the 2019 World Athletics Championships in Doha, Qatar.

The four athletes would be camped for a period of one year and trained by experts to manage and monitor their nutrition, performance and physical condition.

The aim of the GNPC Ghana Fastest is a seven-year plan to unearth and groom the finest of Ghana’s raw athletes and turn them into international stars.

Next year is the final year of the concept aimed at the 2020 Tokyo Olympic Games, and so far the organisers have discovered more about 10 athletes.

Rex Brobbey, a former national athlete and Olympian said the objective is about to be achieved as the team was able to win gold at the African Games.

He noted that what is needed now is more competitions on the international tracks and the discipline, desire, determination plus self-motivation of the athletes to perform.

“As you may or may not know, every year, from March to August, we stage our GNPC Ghana's Fastest Human 100-meter event for all the regions, in the Under 10, Under 15, Under 18 and Senior categories for both male and female, 6 years in a row to date.

“In September, we bring all the winners to Kumasi to find out WHO is the fastest amongst them and crown the Champions. Then in October, we select the best 4 out of the lot and for one year, take care of EVERYTHING for them, from the accommodation, feeding with a nutritionist, medical, transportation, schooling/tutoring/job placement to access to the best sprinting coaches and a sports psychologist.

“They are also fully kitted by Adidas with the latest in running gear. The four we have chosen for the 2019/2020 year are on the flyer attached to this post. Remember their names and help say a prayer for us as we begin camping today for one year” he explained.

Meanwhile, the Ghana Olympic Committee (GOC) president has commended Rex Brobbey for his vision and hopes the programme would be extended.