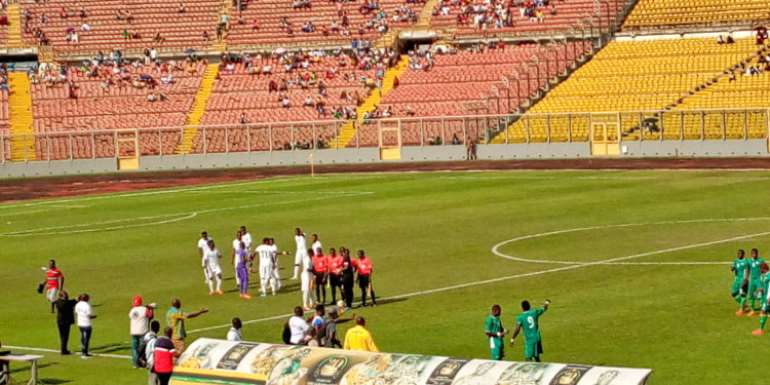 Striker Wendyam Yannick Stephane’s late strike was enough to give Burkina Faso a 1-0 win over Ghana’s Black Stars B in the first0 leg of the 2020 Chan qualifiers at the Baba Tara Stadium on Sunday.

The visitors who barely created any decent chance throughout the game needed a stoppage-time brilliance from Yannick to break the hearts of Ghanaians at the Baba Yara Stadium.

Ghana slightly dominated play in the first half but failed to put a goal in the Burkina Faso net.

Asante Kotoko winger Emmanuel Gyamfi could have put the Black Stars B ahead but his feeble shot was saved by goalkeeper BabaYoure Aboubacar Sawadogo.

Ghana quickly regained power and started piling incessant pressure on Burkina Faso but again Shafiu Mumuni who captained the team on the day missed a fine chance to score for his side as header went off target as the game ended barren after the first 45 minutes.

Back from break, Coach Maxwell Konadu made two quick substitutions, after breaking on James Akaminko and Emmanuel Ocran for Appiah McCarthy and Emmanuel Gyamfi respectively.

Few minutes later, New Edubiase United striker was introduced into the game to replace captain Shafiu Mumuni wasn’t at his best quality in the game.

Ghana kept pressing for a goal but had to be punished in the last stanza of the game.

The reverse leg comes off in Burkina next month after the WAFA tournament in Senegal.