France cruise to victory over Andorra in Euro 2020 qualifier 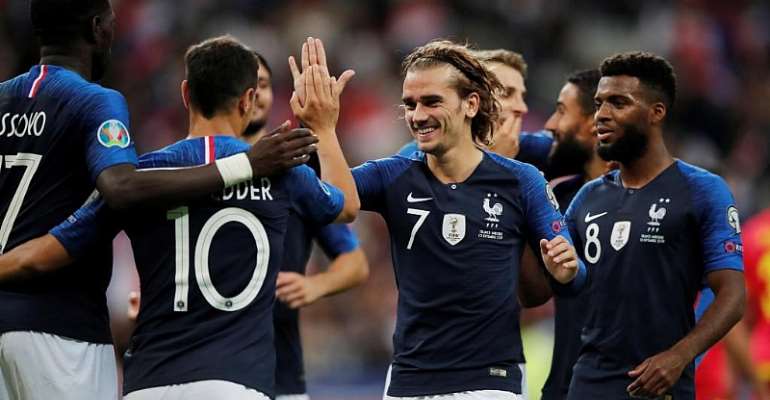 Antoine Griezmann missed a penalty for his country for the second game running but Kinglsey Coman, Clement Lenglet, with his first on the international goal, and Wissam Ben Yedder clinched three points.

Griezmann remarked "It is really annoying. I'll just need to keep working. You can't be on top of your game all the time."

Speaking to French TV channel TF1, Coman said "It has been a very good week. It has gone well personally and collectively."

Other qualifiers
In other games, Cenk Tosun scored twice as Turkey beat Moldova with ease in a 4-nil victory in Chisinau. But Iceland, who had been level with the top two, suffered a blow as they lost 4-2 in Albania.

It also changed the tie-break, allowing Turkey to take first place from France.

England and Portugal both scored five goals as they overcame lowly-ranked Kosovo and Lithuania in Tuesday's qualifiers.

Ronaldo on form
Portugal's captain Ronaldo, making his 160th international appearance, scored four as Portugal won 5-1 in Vilnius and strengthened their position in Group B after a sluggish start.

For Ronaldo it was a second hat-trick in three internationals.

The victory over Lithuania, 130th in the world rankings, kept brought Portugal five points behind Ukraine at the top of Group B.

Portugal, who opened the group with home draws against Ukraine and Serbia, started their recovery with a victory in Belgrade on Saturday.

They have a game in hand on all the other teams in the group.

They are one point behind Portugal.
Bizarre game
In Southampton, Gareth Southgate's England side trailed early on to Kosovo, ranked 120th in the world,  when Valon Berisha scored after 34 seconds.

England replied with a first-half goal binge that ended with Jadon Sancho scoring twice to make it 5-1 at half time.

The visitors claimed two back in the second half, including a second for Lazio midfielder Berisha, but the 5-3 victory put England three points clear in Group A, ahead of the second-placed Czech Republic, who beat Montenegro 3-nil.