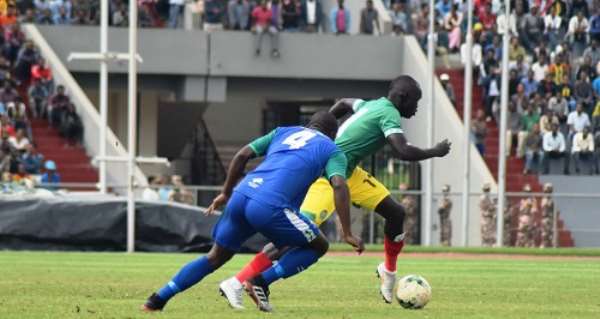 Lesotho were too good for dominant Ethiopia in their FIFA World Cup Qatar 2022 preliminary round qualifier first leg tie played in a packed Bahir Dar National Stadium as the Crocodiles hold the Waliyas to a goalless draw on Wednesday.

Ethiopia’s winless streak in the World Cup qualifier encounter soar to four games as Lesotho went back with a convincing result in what was coach Thabo Senong’s first at the helm.

The homers started on the right foot as they launched an all attack since the onset. Omod Okuri’s goal-bound volley was deflected out for a corner by an alerted Basia Makepe in the opening minute. Ten minutes later, Shemeles Bekele did great to set up Amanuel Gebremikael but the latter could not trouble Lesotho custodian Thabiso Lichaba.

The visitors almost got a surprising lead through Tsepo Seturumane’s curling effort but veteran Ethiopian goalie Jemal Tassew was equal to the task in the 15th minute. Three minutes later, Jane Thabantso’s header was parried by Tassew. Lesotho grew in confidence with their two attempts on goal and were creating havoc to the Ethiopian defence.

Bekele’s perfect through ball freed the unmarked Mujib Kassim to unleash a powerful low drive but Lichaba brilliantly denied the home side a goal in the 33rd minute. In the 40th minute Ahmed Reshid of Ethiopia almost scored an own goal only to be saved by the post before Gatouch Panom’s miss at the other end.

Following the resumption, the Waliyas dominated the proceedings but were not sharp enough to create clear scoring chances with Reshid, second-half substitute Mesfin Tafesse and Gebremikael squandering chances that came their way. The organized backline of Lesotho made life more harder for the Ethiopians to not score goals.

Second-half substitute Neo Mokachane came the closest to find the back of the net three minutes before time as his perfect strike sailed just over the crossbar. Another scoring chance was created for Motebang Serra but the centre forward could not keep his shoot down.

Lesotho take back home a valuable away draw ahead of the second leg in Maseru next Sunday.

Abraham Mebratu (Head Coach, Ethiopia)
We fared better in this game. We created many scoring chances. Nevertheless, we could not execute the chances we had. That has been the biggest problem of our team in recent times. I believe we should work more on this. I am elated with the performance of the boys today regardless of not getting the win.

Thabo Senong (Head Coach, Lesotho)
The game was very good. It was a tough match. Well done to Ethiopia as they are good technically. They were strong and dominated possession. We just wanted to be organised, compact and disciplined. We created chances on transitions mostly counter attacks, but we failed to finish them. We need to fix that.