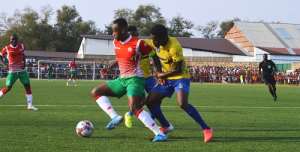 Teams on the road picked valuable points as the African journey to the FIFA World Cup Qatar 2022 kicked off on Wednesday with the first leg matches of the preliminary round.

Of the eight matches, the six away teams returned to their bases unscathed with Namibia, Mozambique and Guinea Bissau grabbing wins on the road whilst Tanzania, Lesotho and Equatorial Guinea shared the spoils with their hosts.

Djibouti and Liberia were the only sides to record victory, the former their first win in more than two years.

Namibia’s Brave Warriors beat a determined Eritrean side 2-1 in Asmara as coach new Bobby Samaria launched his stewardship with a win. Peter Shalulile, who was named captain just before the game celebrated his new role with the opener on 50 minutes before an own goal by Esey Tsefaye eight minutes later extended the lead of the Warriors. Ali Sulieman pulled one back for the Red Sea Camels on 65 minutes but was not enough to save the homers from defeat.

In Belle Vue, Telinho struck after minutes as Mozambique silenced home side Mauritius whilst Nanu converted an 85th-minute penalty to give Guinea Bissau a lone goal victory over Sao Tome e Principe in Sao Tome city.

Fresh their exploits at the recent Total Africa Cup of Nations Egypt 2019, Burundi and Tanzania sold out a good game but ended one-all at the Prince Louis Rwagasore Stadium in Bujumbura. The game marked an emotional home return for Tanzania coach Etienne Ndayiragije as he guided the Taifa Stars to play against his country of birth.

After a barren first half, Cedric Amissi broke the deadlock with an angled shot nine minutes from time. Four minutes later, a miscommunication between Burundi goalkeeper Jonathan Nahimana and defender Frederic Nsabiyumva gifted the ball to Simon Msuva, who fired home for the equalizer.

Another coach on the bench for the first time was South African-born trainer of Lesotho, Thabo Senong. Appointed last week, Senong guided Likuena to hold Ethiopia to a barren stalemate at a packed Bahir Dar Stadium.

“It was a tough match. Well done to Ethiopia as they are good technically. They were strong and dominated possession. We just wanted to be organised, compact and disciplined. We created chances on transitions mostly counter-attacks, but we failed to finish them,” Senong told the media after match.

“We created many scoring chances. Nevertheless, we could not execute the chances we had. That has been the biggest problem of our team in recent times. I believe we should work more on this. I am elated with the performance of the boys today regardless of not getting the win.”

Playing away from home in Omdurman due to construction works at the Juba Stadium, South Sudan came from behind to hold Equatorial Guinea to a 1-1 draw. Nzalang Nacional went up on 35 minutes through Luis Meseguer before an own goal by Niko Kata on 75 minutes denying the islanders a famous away win.

At the El Hadj Hassan Gouled Stadium in Djibouti city, Djibouti managed a rare win over Eswatini, their first since beating South Sudan 2-0 in a Total Africa Cup of Nations Egypt 2019 qualifier in March 2017 at the same venue.

Mahdi Mahabeh ensured Djibouti went into recess with their noses in front, but Siboniso Mamb restored parity on 56 minutes. Substitute Abdi Hamza scored the winner from a goalmouth scramble on 74 minutes after Eswatini goalie Mathabela Sandanzwe had spilled a penalty.

Elsewhere in Monrovia, Liberia outclassed neighbours Sierra Leone 3-1 win in Monrovia. Terrence Tisdell, Mohammed Sangare and captain Sam Johnson were on target for the Lone Stars whilst Kwame Quee grabbing the consolation for the Leone Stars.