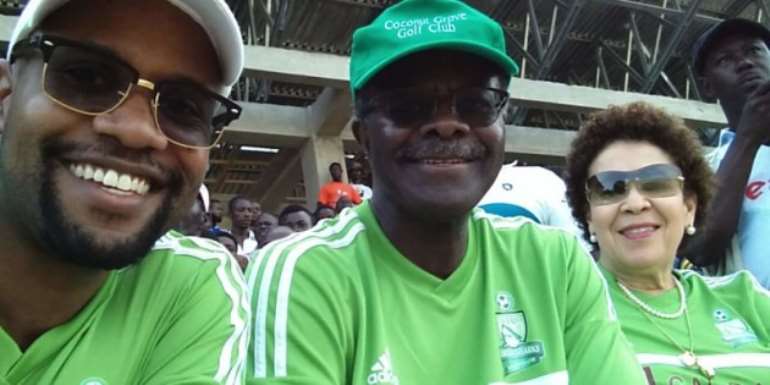 A customer of Gold Coast Security which is a subsidiary of the GN Group named Eric Essel Lartey has confirmed that Dr Papa Kwesi Ndoum is planning to liquidate some business under GN Group in the coming days.

According to Mr Lartey, Gold Coast Security owes him and his family members close to One billion old Ghana Cedi.

Mr Lartey further confirmed that the liquidation process of Ghana Premier League outfit, Elmina Sharks and their home venue, Ndoum Sports Complex which all fall under the Group Ndoum have begun.

Narrating his side of the story on the Tuesday edition of Spice Center Sports, Eric Essel Lartey said that he is struggling to pay his school fees as a law student at the University of Cape Coast.

“I’m also a football enthusiast so I don’t feel happy about the issue going on, but I will make my grievances known to the public. I am studying law at the University of Cape Coast and I pay 8,000 cedis every year as school fees. I have deposited my money at Gold Coast and I have been told to fill an emergency form, which was a promise that our money will be coming very soon but that hasn’t been the case. We filled the form last year; after all the back and forth, we are yet to hear from them, their office at Cape Coast has been closed for over a year.

"I have been borrowing since that time to be paying my school fees and I have to settle those I borrowed from. I went to see one Lawyer who “helped me to write a demand letter, we have now given them two weeks ultimatum that if we don’t hear from them, we will send the case to court, of which we will attach their sports stadium at Elmina (Ndoum Sports Complex) and their football club (Elmina Sharks) as the things we are demanding from Dr Papa Kwesi Ndoum, because there is a principle under company law which backs that.

When asked why his focus is on the sports side of the over 50 businesses owned by Dr Papa Kwesi Ndoum, Eric revealed that most of the business under Dr Ndoum are facing legal actions.

“Lots of people have sued them with the judgment that needs to be executed, so our check tells us that the Sports Stadium and the Football Club are few of his properties that haven’t been tempered, so to play it safe, that is where our interest is.