Barcelona Skipper Messi Out of U.S. Tour With Calf Strain 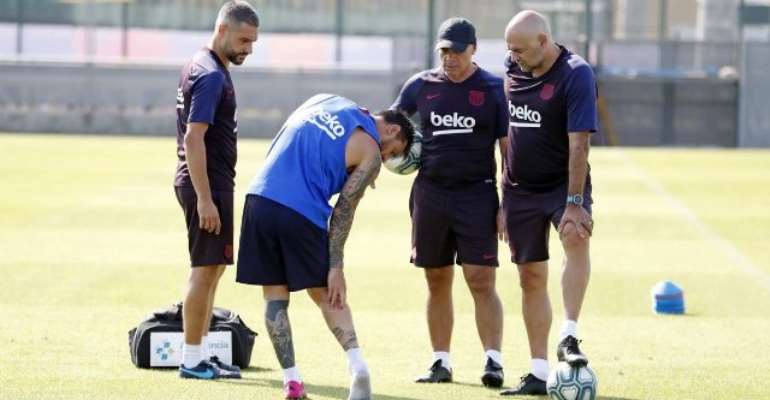 Barcelona skipper Lionel Messi will not travel to the United States for the club's pre-season tour after sustaining a calf problem on his return to training from a close-season break, the La Liga champions said on Monday.

The Argentine forward experienced discomfort in his right leg during Monday's training session and tests confirmed that the 32-year-old had suffered a grade one calf strain, forcing him out of the tour.

"Messi will remain in Barcelona... his availability to come back to action will be dictated by his recovery," Barcelona said in a statement https://www.fcbarcelona.com/en/football/first-team/news/1300856/leo-messi-suffers-right-calf-injury on their website.

Barcelona are set to travel to the U.S. later on Monday, with two friendly matches scheduled against Italian Serie A side Napoli on Aug. 7 (Miami) and 10 (Michigan).

Messi was banned from international duty for three months and fined $50,000 after levelling accusations of "corruption" at South American soccer chiefs during last month's Copa America.

He was sent off against Chile in the third-place playoff and later alleged that the tournament had been fixed in favour of hosts Brazil, who defeated Argentina in the semi-final on their way to the title.