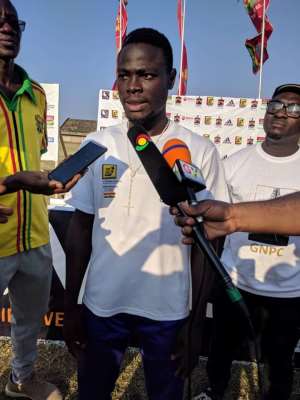 Edwin Gadayi is one of athletes who has benefited from Ghana’s Fastest Human training and benefits and on Saturday, he hopes to satisfy his fans and family with a good show in the 2019 Ashanti Region Edition which comes off on Saturday, June 29, 2019, at the KUST Paa Joe Stadium.

Gadayi is West African 100m champion and he must prove his worth against an expected stiff challenge.

As we move closer to the next Olympic Games in Japan, the aim and desire of every athlete is to qualify, and Ghana Fastest Human which was invented by Reks Brobbey, a former national champion has inspired many young sprinters to improve their performances

The founder and organiser of the competition, Reks Brobby, pointed out that the stage is set for athletes in the Ashanti and Brong Ahafo regions.

Athletes are expected to compete in 100m sprint competitions for U-10, U-15 and U-18, as well as the seniors in both male and female categories.

The Ghana Athletics Association (GAA) will provide an electronic timer for the competitions which are free to enter to, participate or watch.

Already, two exciting editions for 2019 have been organised in Tamale and Cape Coast.

It is aimed at preparing athletes to grab medals in 100m at the Tokyo 2020 Olympic Games.

“I feel proud that some previous participants of the GFH like Joseph Amoah have improved tremendously and already qualified for the Olympic Games,” Brobby said.

He indicated that there are many runners who must be unearthed and polished to become superstars.

The government of Ghana, Ministry of Youth & Sports, the National Sports Authority (NSA), GAA and the Ghana Olympic Committee (GOC) are supporting the GFH initiative.

Over 200 sprinters are expected for September’s final of finals which will select some of the best runners for the 2020 Olympic Games.