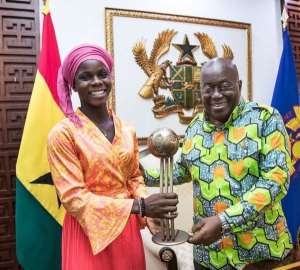 Mukarama Abdulai, captain of the Black Maidens at the FIFA U-17 tournament held in Uruguay, was at Jubilee House on Thursday, 20th June 2019, to present the Golden Boot and the Adidas Bronze Ball she won to me at the tournament.

The Northern Ladies striker excelled in the U-17 Women’s World Cup in Uruguay.

Her impressive performance earned her a place in the Black Queens.

She is Ghana’s all-time top scorer in a Women’s World Cup competition.