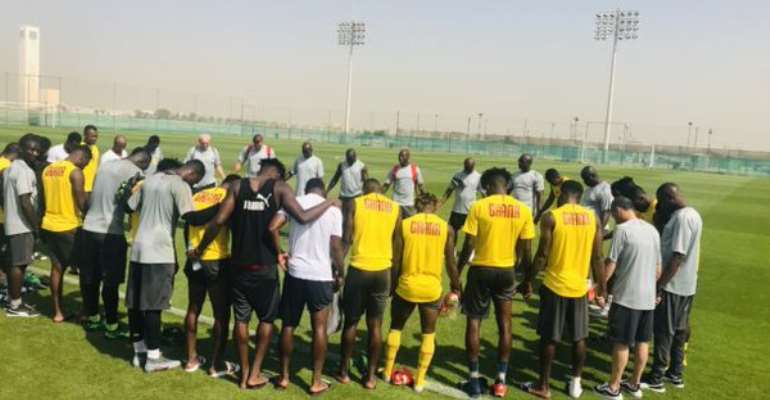 The Normalization Committee of the Ghana Football Association has called on Ghanaians to support the Black Stars ahead of their clash against Benin.

Ghana will play their first match against the Squirrels at the Ismailia Stadium at 20:00GMT.

However, ahead of the game, the Committee has implored Ghanaians to rally behind Kwesi Appiah and his boys.

Below is the full statement...
The GFA Normalization Committee (NC) calls on the good people of Ghana to rally behind the Black Stars ahead of the opening Afcon Group F opening game with Benin tomorrow (Tuesday).

It is imperative that at this stage, we bury our differences, come together as a nation and pledge unflinching support for the Black Stars as they face the Squirrels of Benin Tuesday evening in the Egyptian City of Ismailia.

The Normalization Committee in collaboration with the Sports Ministry, Management Committee, and the Technical team have been proactive in planning the camping activities of the Black Stars. Team Ghana undertook three weeks of intensive preparation in a sweaty Dubai environment to condition them for the task ahead.

With the utmost desire to end Ghana’s 37-year old Afcon trophy drought, the Black Stars' preparations began immediately after Ghana’s last Africa Cup of Nations qualifying game in Accra. For the first time in over a decade, the team had the opportunity of playing a friendly game in front of home fans at the Accra Sports Stadium against AFCON 2019 participants, Mauritania.

Aside the provision of logistics, the Nana Addo-led government has shown leadership in all fronts to restore the pride of Ghana football. In the aftermath of the Anas exposé, Government has taken the lead in engaging with and inspiring stakeholders to participate in developing, achieving, as well as embodying a shared set of values, a shared sense of purpose, and a new shared vision for the desired outcome. The first Gentleman of the land and his entourage, as well as the minister for Youth and Sports, will be at the Ismailia Stadium to cheer the Black Stars to victory. The N.C is imploring fellow countrymen to compliment the effort of His Excellency Nana Addo Dankwa Akufo-Addo by way of supporting the team.

The Ghanaian is a shining example of Africa; our leadership as manifested in all spheres of human life saw us become the first African country sub of the Sahara to gain independence from colonial rule. Rightly so, the Black Stars became the first ever African country to win the AFCON trophy for keeps by emerging champions in 1963, 1965 and 1978. By extension, our opponent in the opening game, Benin, became a beneficiary of Ghana’s pioneering role in African football when one of our illustrious sons, Sir Cecil Jones Attuquayefio led Benin to their maiden AFCON qualification in 2008, in a tournament that was coincidentally hosted by Ghana.

The Black Stars is the embodiment of the spirit of the nation and the right support from all stakeholders of the game will go a long way to impact positively on the total output of the team.

The adrenalin that runs through our veins as a people when the national anthem is played goes to confirm that we are one people with a common destiny.

It is therefore important that as the Black Stars step on the field of Ismailia on Tuesday evening, we cheer them throughout 90 minutes, in good and bad moments.

"And together, we move forward victory upon victory," echoes Dr Kofi Amoah, President of the GFA Normalisation Committee.

You must be encouraged and supported for not being a spectat...
9 minutes ago