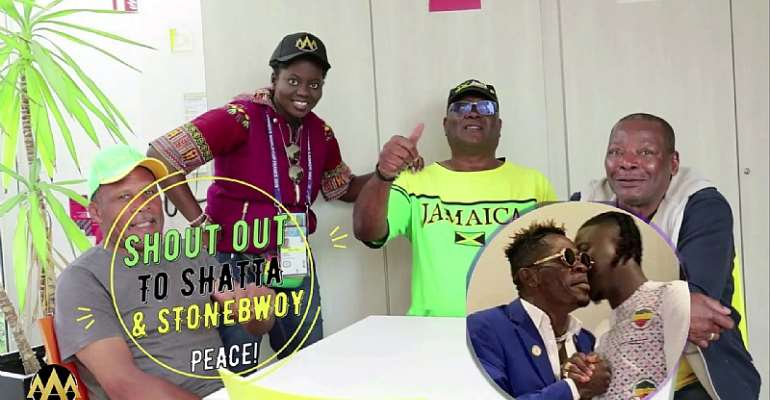 Episode 2 of Fabulous France with Triple A, Ghana’s only 2019 FIFA Women’s World Cup diaries produced live from the tournament’s host country, is out. And there’s a message in it for Ghana’s eternal dancehall rivals, Shatta Wale and Stonebwoy.

Over the past week, reporter Angela Akua Asante was in Reims -- the city which witnessed the Women’s World Cup’s biggest scoreline ever as reigning champions USA mercilessly whipped Thailand 13-0.

Also in Reims were Team Jamaica and a handful of their supporters and media officials to follow the Reggae Girlz’s second group stage game against Italy.

“I could actually see Jamaica’s team bus by my room’s window at the HotelF1 Reims Tinqueux,” AAA revealed.

“I believe the players were staying at the hotel just next to mine, which is about a 10-minute ride to the Stade Auguste Delaune.”

Logically, Jamaican fans flocked to the HotelF1 to be closer to their heroes, whose chances of reaching the knockout stages at the tournament are extremely slim following two consecutive losses.

Some of the supporters requested to be on Triple A's camera for their brothers and sisters in the Motherland to know that they've made the trip to France not because they understand anything about football, but because they support their ladies all the way. This wasn’t their only message, however.

They had one for Ghanaians in particular in that the country’s dancehall artiste, Shatta Wale and Stonebwoy, are both kings in their own right. Check out the shout out below: