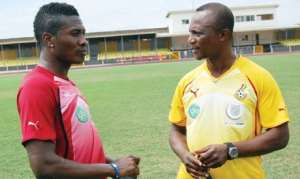 Black Stars striker Asamoah Gyan is expected to meet Coach Kwesi Appiah in order to pledge his commitment to the team ahead of the upcoming AFCON.

Gyan was stripped off the captaincy last week and made the General Captain of the team, while Andre Dede Ayew becomes the new captain.

The news didn’t go down well with Gyan who decided to retire and later unretired after meeting president Nana Akufo Addo.

The Kayserispor forward is expected to meet Kwesi Appiah on Tuesday in other to sort out their “differences” ahead of the team camping in Dubai.

According to Gyan’s spokesperson, Sammy Anim Addo, Gyan would be arriving in the country on Monday night to meet Appiah.

“What happened last week is history and Gyan is committed to playing this role to ensure that the agenda to win the 2019 AFCON is carried through,” Anim Addo told Graphic Sports.

“Gyan is expected in town on Monday night and though they have spoken on phone, he will meet with Kwesi Appiah face to face for the first time since the announcement to reassure him of his commitment before the team assemble to prepare for the tournament.”