Otumfuor Cup: We Will Do Our Best To Win This Historic Game – Felix Annan 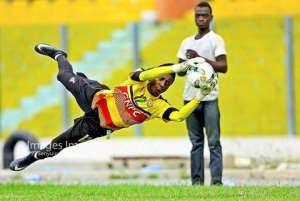 Goalkeeper of Kumasi Asante Kotoko Felix Annan has revealed his happiness to feature in the upcoming Otumfuor Cup and to win against Asec Mimosas.

The Otumfuor Cup will be played on Sunday at the Baba Yara Stadium in honour of the Asante King Otumfuor Osei Tutu II who is celebrating his 20th anniversary.

According to the shot-stopper, playing on Sunday would be a privilege.

“I’m very happy to be part of this historic moments, playing the 20th Anniversary to honour our Great King is a big privilege for me and the entire team,” Annan told Ashh FM.

“We will do our best to win this historic game against Asec Mimosas to honour our Great King on Sunday.”

The Porcupine Warriors will play against Ivorian powerhouse Asec Mimosas to celebrate Otumfuor’s 20-year reign over the Ashanti Kingdom.

We will refund monies to Muslims we couldn’t fly to Mecca – ...
5 hours ago