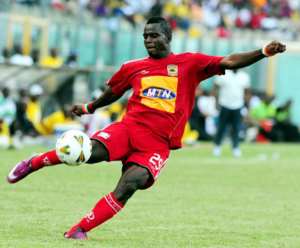 Former Asante Kotoko and current Asec Mimosas striker, Ahmed Toure has reiterated his desire to wear the Kotoko colours in the Otumfour Cup on Sunday at the Baba Yara Sports Stadium.

The Porcupine Warriors will host Ivorian side Asec Mimosas as they celebrate Otumfour’s 20th Anniversary.

According to Toure, he will like to represent his former side also even though he will be playing for Asec Mimosas.

“The game between Kotoko is just a friendly game so there is no friction. I would love to wear the Kotoko jersey in the course of the game if the opportunity comes,” Toure told Ashh FM.

Ahmed Toure will join Congolese side AS Vita next season after penning a two-year contract.