Ghana Football Has Been Soiled With Politics, Says Harry Zakour 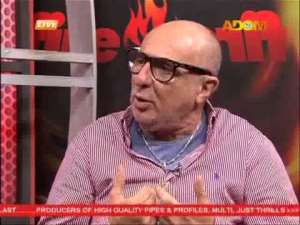 Former Hearts of Oak chairman, Harry Zakkour has insisted that Ghana football has now turned into politics since the appointment of the Normalization Committee by FIFA to manage football activities in the country.

The world football governing body appointed the four-member committee to run the affairs of Ghana football after the premiering of the 'Number 12' video by Anas Aremeyaw Anas on June 6.

According to the tough-talking politician, genuine football people have been sidelined by government with politicians being appointed to serve on the various committees of the Normalisation Committee.

"Ghana football has turned into politics, not because I’m an NDC ex-chairman," he told Kumasi FM. "When I look at things now, all their appointments have turn into politics.

"There are a lot of people who can help build it but don’t want to get involved because it’s been turned into a political team.

"The government should not mingle politics with football but rather invite the people who are not involved in politics to work.

"I shouldn’t be sidelined because I’m an NDC because of my record in football. I’ve done football since childhood and no one can break my record.

He further insisted that he wants the likes Sam Brew Butler, Ade Coker and MND Jawula with their rich experience in football administration to serve as counsellors to the GFA in their bid to return Ghana Football to normalcy.

"The likes of Sam Brew Butler, Ade Coker and MND Jawula should be advisors to the GFA. ”We should put politics aside and look for people who want to do football.”

Cargo With Foodstuff Grounded At Techiman Market Over Covid-...
9 hours ago