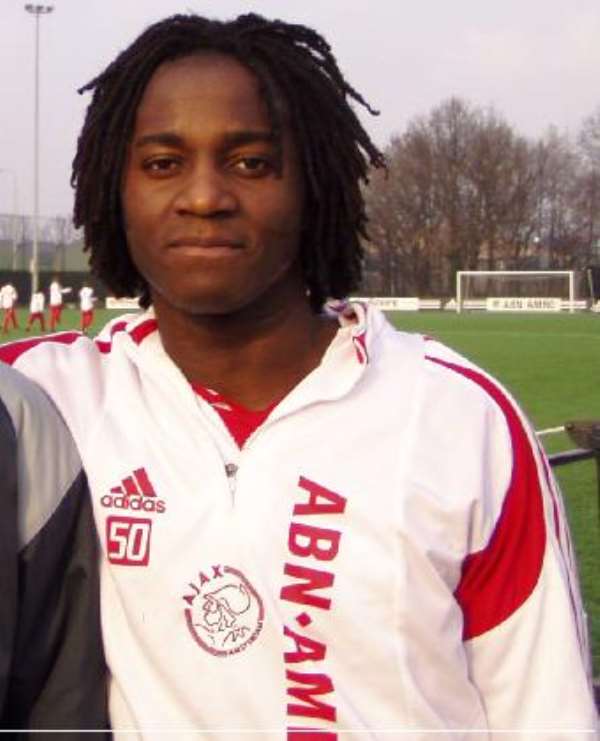 04 November: Young Ajax captain Stanley Aborah, who had five first team performances in the fall of 2004, will play for Dutch First Division outfit FC Den Bosch until 30 June 2006. Ajax and Den Bosch agreed on the loan deal on Monday evening. Aborah's deal with Ajax will expire on 30 June 2007.

Stanley Aborah was born in Kumasi, Ghana (23 June 1987), but has a Belgian passport. Before he entered the Ajax youth system he spent one season at Germinal Beerschot Antwerp. Ajax had a technical partnership with the Belgian First Class side at the time.

In Amsterdam Aborah joined Young Ajax in the summer of 2004, but was - rather surprisingly - added to Ronald Koeman's first squad in October 2004. He made his Eredivisie début in the Eredivisie home game against SC Heerenveen on 16 October. It was the first of Aborah's four Eredivisie appearances in a brief period (the last was on 28 November of the same year). On 19 October 2004 Aborah also made his 'European' début for Ajax-1 in the Champions League home game against Maccabi Tel-Aviv.

After his brief spell as an Ajax-1 player Aborah returned to Young Ajax, where he developed a reputation as an enfant terrible and a love-hate relationship with coach John van den Brom, who made Aborah captain, but also banned him from the team for a few weeks when the players reacted to a substitution by verbally abusing the coach. Aborah had 27 appearances for Young Ajax in the Beloftencompetitie ('Talent Competition') in the past two seasons.

FC Den Bosch director Fred van der Hoorn commented on the club's official website: "Aborah is a more than talented player, about whom we already talked to Ajax last summer. Ajax wanted to wait until December, but when the KNVB came up with an October 31 deadline for domestic transfers, things developed fast. We are very pleased with that, as Aborah could really add something extra to our team." (MP)

Vetting: Some NDC MPs were compromised; it was a shameful, p...
12 minutes ago