[email protected]: Ghana is OUT! 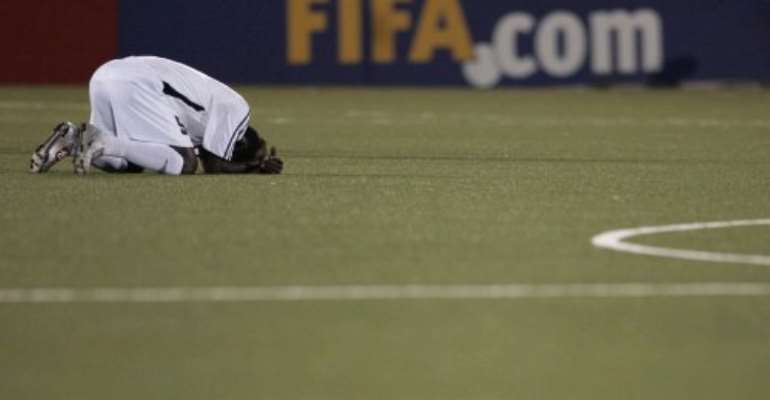 Heroic Ghana were eliminated from the FIFA U-17 World Championship Peru 2005 as China desperately held on for a draw, despite the Ghanaians playing most of the match with only 10 men at the Miguel Grau Stadium, Piura. Chinese coach Zhang Ning admitted afterwards: "The result was what we expected… that was what we set out to do and we succeeded. Ghana are a very good, fast team and if they didn't have a man sent off the field, we would have had much more trouble." China were without their star goalkeeper Dalei Wang due to suspension and it was his replacement Wenyi Chi who saw by far the most of the action throughout, with his defences twice being breached early on before the referee's whistle bailed him out of trouble. First Ghana's Opoku Agyemang found the net only to have his strike ruled out for an earlier foul on Chinese defender Linfeng Li, then Agyemang beat Chi once again in a frenetic passage of play. His Ghanaian strike partner Sadat Bukari forced a superb stop out of Chi and from the resulting corner, the same player headed against the crossbar. When the rebound fell to Agyemang, he bundled the ball over the line, but the ref had already blown for an infringement in the box. Ghana then had a strong penalty appeal turned down and it seemed as if China would be on the ropes for the entire half, but they were thrown a lifeline when their opponents were reduced to 10 men as early as the 21st minute. Ghana's George Appiah received two yellow cards within the space of a minute, leaving his team short-handed for the majority of the game. China finally threatened the Ghana goal when captain Zhuangfei Li only just failed to connect with Jian Yang's dangerous free-kick while at full stretch, but the Ghanaians finished the half stronger, bringing an appreciative round of "Olé" chants from the spectators. Mubarak Wakaso made an electrifying run down the left flank and his intelligent cross was met by Charles Boateng and Chi dived low to his right to save well. Ghana emerged early for the second half and went into a huddle on the halfway line to draw inspiration from each other for the decisive period ahead. It seemed to do the trick as they took the lead 11 minutes after the restart, Agyemang making a surging break down the left and his centre was turned on by James Tagoe for Bukari to stab the ball in - and this time the goal counted (1:0, 56'). China's reply was almost instant though as they drew level courtesy of an excellent lobbed effort by Xuanhong Wang on the hour mark (1:1, 60'). Undeterred, Ghana battled back strongly and came within centimetres of retaking the lead with a freak effort by Mubarak Wakaso as Chi raced out to block his shot only to see the ball take a bizarre ricochet off Wakaso and smash against the upright. A cheeky back-heel by Agyemang then set up Emmanuel Adjetey in acres of space, but he blew a fantastic opening by thrashing his shot high over. Bukari then lofted the ball past Chi, but failed to keep his effort low enough as Ghana pressed hard for a second goal to keep them in the tournament. Under immense pressure, China resorted to cynical time-wasting tactics with a full 15 minutes to go and the fans were not slow to let them know exactly what they thought about those techniques.
As if responding to their criticism, China then launched an exciting counter-attack, with Xu Yang playing a neat one-two with Jie Huang before firing over the top. Ghana had one last opportunity to turn the tide of fortunes their way when they were awarded an indirect free-kick near the penalty spot, but when the ball was rolled to Jonathan Quartey, he crashed his drive into the Chinese wall standing firm on the goal-line. Six minutes of added time failed to produce a winner and the result, coupled with the other Group A outcome, sends China through in second place for a quarter-final against Turkey in Iquitos on Sunday.
For Ghana, who left the field in tears, but with the local fans singing their praises, it means an early exit from the FIFA U-17 World Championship Peru 2005 - an unjust reward for their fantastic efforts on a night of bitter disappointment in Piura.
Even though Ghana did not progress, their coach David Duncan said he was proud of his boys and "excited" by the team's performance overall and added: "We can leave with our heads held high. The Chinese just didn't want to play and that's a shame. The spectators didn't come here to see people lie on the turf and roll around. The good people of Peru who were at the stadium are the best judges of who was the better side today."