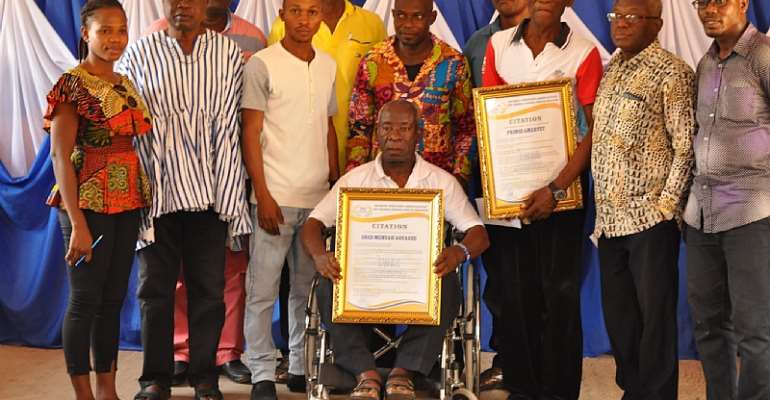 A social group in Ho, Club 50, in collaboration with the Volta Regional Chapter of the Sports Writers Association of Ghana (SWAG) has honoured two ex-national sportsmen for their contribution to sports in the country.

The two are Prince Amartey, 72, a former boxer and Obed Mensah Aguadze, 78, an ex-Black Star player.

Obed Mensah Aguadze was part of the Blacks Stars squad that reached the final of the 1972 Africa Cup of Nations in Sudan and earned the name Brazil due to his skilful dribbling in his hay days.

Today he is confined to his sofa unable to walk and needs assistance to enjoy the sunrise.

He has no option than to remain there until he retires to bed after sunset.

Prince Amartey is a famous boxer and former Army officer who won gold for Ghana at the All African Games in 1965.

He was also a bronze medalist in the middleweight Division at the 1972 Olympics games in Munich. Today, Mr Amartey struggles with mental health complications and now sweeps at a private health facility in Ho to make ends meet.

The decision to honor these two attracted indigenes from far and near to witness the occasion.

The vice chairman of the Volta Regional Football Association, (RFA) Daniel Agbogah who expressed his delight at the gesture pledged the regional FA’s support and entreats organizers to make the event annual.

The Secretary of Club 50, Dickson Pi-Bansah in an interview noted that the two have served their nation diligently and deserve to be honoured.

“As the saying goes a nation that does not honour its heroes is not worth dying for, these are two sports personalities who have done so much for the nation”.

“But they have been neglected, we have found it necessary to honour them. So those young ones who are growing up will emulate them and have interest in sports”. Mr Pi-Bansah said.

The Coordinator of the Volta Regional Chapter of Sports Writers Association of Ghana, Eric Eli Adzie said honouring and appreciating outstanding sports-men it is the key activity of SWAG

He, however, noted that shedding light on the two sportsmen who have brought glory to Volta region and the nation at large shouldn’t go unnoticed.

“We as SWAG will continue to honour heroes that excelled for the country, it is our Key activity to spot them where ever they are”

The two ex-national sportsmen were honoured with a citation, a hamper worth of toiletries, a wheelchair for Obed Mensah Aguadze an undisclosed amount.