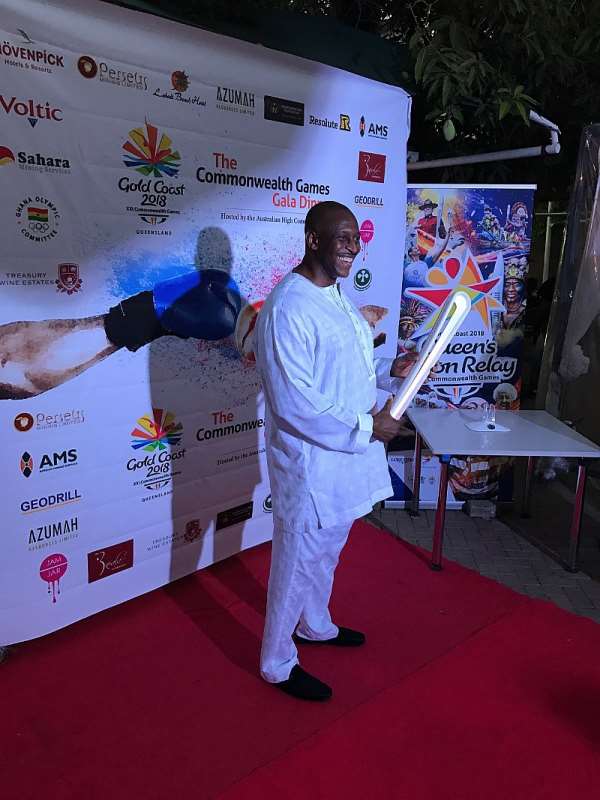 Mr Herbert Mensah, President of Ghana Rugby and Board Member of the Ghana Olympic Committee (GOC), said that he and his administration have their eyes squarely fixed on world cups for Ghana Rugby on Sunday night March 19 after a gala dinner organised by the Australian High Commission in partnership with the Azumah Nelson foundation, the Ghana Olympic Committee and the Gold Coast Commonwealth Games Corporation to receive the Queen’s Commonwealth Baton Relay to Ghana.

Her Majesty Queen Elizabeth II set the Gold Coast 2018 Queen’s Baton Relay in motion following a star-studded commencement ceremony at Buckingham Palace on 13 March 2017 and it sneaked into Ghana like a thief in the night after its first journey through Sierra Leone.

The Queen’s Baton will arrive on the Gold Coast for the XXI Commonwealth Games Opening Ceremony on 4 April 2018, where Her Majesty, or a representative, will remove the message from the Baton and read it aloud to officially open the Games.

The 2018 Gold Coast Commonwealth Games will feature both a men’s and women’s Rugby Sevens tournament after Rugby’s readmittance to the Olympics at the Rio 2016 Olympic Games.

It will be the first Commonwealth Games to include a women’s rugby sevens competition in its sports program.

“Although we will probably not qualify for the 2018 Gold Coast Commonwealth Games, my administration and I have committed Ghana Rugby to reach for the stars by targeting participation in the Rugby World Cup, the Olympics and the Commonwealth Games in the foreseeable future,” Mensah said.

According to Mensah Ghana Rugby is in the process of completing a Quadrennial Plan to prepare the Ghana Eagles - men, women, boys and girls - for world Rugby events.

“Rome wasn't built in a day and given the embryonic stage of Rugby in Ghana many may think we are unrealistic to target these global events in such a short space of time. One has to, however, start somewhere and never give up chasing that Olympic dream that is the ultimate for most athletes,” he said.

As part of the preparation for achieving these big ideals Ghana Rugby will be hosting the Africa Cup Regional Championship between Benin, Ghana and Togo that will take place at the Accra Sports Stadium between 29 April and 6 May 2017.

Mensah also stressed the importance for both Ghana and Ghana Rugby to host the tournament successfully by stating the following facts as part of the motivation to both the government and corporate sponsors to take an active part in the tournament.

The hosting of this tournament by Ghana is important to Ghana for the following reasons: