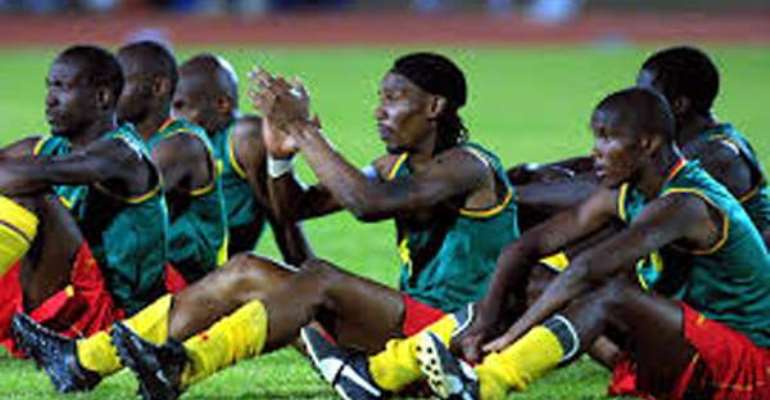 Exactly 15 years today, the Indomitable Lions were crowned champions of Africa for the third time beating the co-hosts, Nigeria in a controversial penalty shootout.

On Sunday, 13th February, 2000, Cameroon won the African Nations Cup (AFCON) on Sunday, beating Nigeria 4-3 in a controversial penalty shoot-out after the teams had drawn 2-2 after extra time.

Victor Ikpeba's fourth penalty for Nigeria appeared to cross the line before bouncing out of goal but was not awarded. The decision led to a third African crown for the Indomitable Lions, the previous two also coming with wins over Nigeria in the 1984 and 1988 finals.

Nigeria rode their luck throughout 120 minutes. They were twice saved by the woodwork and recovered from two goals behind to draw 2-2 in 90 minutes.

Cameroon stunned the co-hosts with two goals in a five- minute spell through Samuel Eto'o, then with Real Madrid and Patrick Mboma. Each claimed their fourth goal of the tournament. Eto'o scored with a shot on the turn following a free kick from the right in the 26th minute. Mboma increased Cameroon's lead after 31 minutes, scoring with a left-foot shot which went through the legs of Nigeria goalkeeper Ike Shorunmu. Cameroon were cruising at this stage, with Nigeria's defence in disarray, and nearly went three ahead when Mboma headed against the post in the 37th minute.

It was a crucial miss as Raphael Chukwu scored to put Nigeria back in contention in first half injury time. Nigeria equalised two minutes after the break thanks to a rasping 30-metre drive by Austin Okocha, which flew into the top corner of the net.

Nigeria captain Sunday Oliseh was lucky not to be sent off for punching Geremi Fotso Njitap. He escaped with a yellow card, one of five players cautioned.