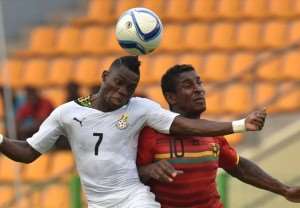 AfricanFootball.com takes a look at the top three goals at the 2015 African Cup of Nations thus far.

Mandla Masango v Ghana
Mandla Masango's strike for Bafana Bafana against Ghana drew praise from across the globe. The Kaizer Chiefs midfielder's effort was similar to that of James Rodriguez for Colombia in the 2014 FIFA World Cup, which was awarded the Puskas award earlier this year. Masango stepped back before striking an attempted clearance on the volley from outside the area, the ball dipped at the last possible second to give the goalkeeper no chance.

Christian Atsu v Guinea
Atsu, who has been one of the star players at this year's tournament, netted a memorable goal against Guinea in a 3-0 win for the Black Stars. Atsu charged down the right flank before stepping infield, a few metres from the line, looking up and then striking an unstoppable left-footed effort into the back of the net from about 30 meters.

Javier Balboa v Tunisia
Having netted the penalty to take the game to extra time, Balboa produced a moment of magic to book Equatorial Guinea's place in the semifinals for the first time.The former Real Madrid man curled an inch perfect free-kick into the top corner from 25 meters to send the home fans into ecstasy.

Max Gradel v Cameroon
Gradel's powerful effort from range left the Cameroon gloves-man with no chance. The only goal in a 1-0 win for the Elephants which booked their place in the knockout stages.

Asamoah Gyan v Algeria
Gyan showed why he is one of the most feared strikers in African football, racing onto a long ball forward before finding the back of the net from an acute angle to net an important goal in a 1-0 win for the Black Stars in the second minute of second-half stoppage time.

Thuso Phala v Algeria
A brilliant team goal by Bafana Bafana. Tokelo Rantie and Sibusiso Vilakazi with brilliant one touch football down the left flank, Phala with the finishing touch.