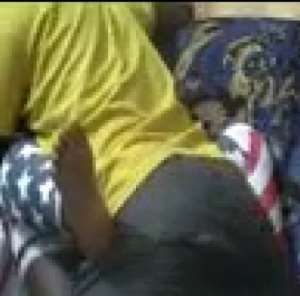 Initially it was a rumour. Then one victim was named and now up to 84 women resident in the Eastern Regional town of Begoro would have to live the rest of their lives on earth in disgrace following their sexual encounters with a 'choir leader'.

Yaw Offei, a photographer by profession who is in his late forties (40s) is the main character in sexually explicit films fast spreading in the world of social media. Women between the ages of eighteen (18) and forty (40) years in their quest to have their photographs taken by him are now victims of his sexual escapades.

His photo studio which is located close to the durbur grounds of the ancient town and a two-in one violet sofa in there is the setting he makes the ladies lie and willingly open their legs for penetration.

The chair is situated directly opposite the web cam of his personal laptop with which he uses to record his sexual bouts with the women.

Four part series of many
Part one of the four different videos in the custody of www.Adomonline.com which unfortunately cannot be posted online due to its unsavoury contents opens with a female character who is thought to be married with children sitting in the sofa and patiently awaiting 'Bra Photoo' who gradually takes off his black and white hand woven batakari attire and his khaki trouser and then his black pants before pouncing on her for the main act.

The lady also undresses and acting like a sheep who is forcefully being dragged to a slaughter house, sits in the sofa before finally opening her legs to allow penetration by the naked Offei.

Without foreplay, Offei bonks his victim for close to four minutes without a condom before he finally pulls out and discharges on the floor of his photo studio.

Similar acts are repeated in the other three verses with the difference being the dressing of Offei and different female victims. Different sex positions are also tried on separate occasions with different women.

There exist several still photographs of females as well.

Adomonline.com expects to recieve more of these videos in the coming days.

Spreading like wild Fire
The scenes from the four parts of the many sexual escapades of the Photographer are now the talk of the entire Begoro township with each phone owner in the Fanteakwa district capital, popular for producing tomatoes for the Ghanaian market, in possession of copies.

Primary school pupils are no exemption as Adom News Reporter, Maxwell Kudekor who visited the town saw them gather in groups to discuss its contents.

Persons whose faces and names popped up in the videos and the still photographs are said to have fled out of town with no one knowing their whereabouts.

What saddens most townsmen and women is how the fiancé of a lady captured in the video chose to tear into pieces a list which he had received from the parents of the lady to perform her traditional marriage rites soon.

The groom to-be and his family are said to have strongly advised him to quickly desist from courting the company of a sexually promiscuous lady.

Divorces
The agony of the young woman does not surpass that of at least two married women whose husbands in the traditional Akan style 'have thrown out their belongings' from their matrimonial home for being adulterous.

Their husbands are said to have insisted that they can no longer marry such shameful women who would make them subjects of public ridicule.

One of them, who wore a brassiere and a matching panty for the still photograph is said to be a popular lady who sells food at Kradaso, a popular area in the town.

Her whereabouts still remain a mystery surrounded.
The townsmen and women claim they would never allow anyone to buy from her again even if she returns to continue her business.

But the multi-million question is, would she in the face of the everlasting shame, return and even if she does, sell at the same location?

Who is Yaw Offei
The limping photographer appers to have shot to fame and become a household name in Ghana, but for a negative reason.

Adom News' investigations revealed that this is not the first time the celebrated local photographer whose masterpiece is evident in the perfect manner and angle from which he captured the private parts of Begoro ladies has sexually exploited females of the town.

“Some time ago, he was said to have raped certain women in the church causing the church to suspend him as an elder…,” a lady who pleaded anonymity told Kudekor.

Adomonline.com was unable to corroborate the exact date and time this took place.

His wife who declined an interview when approached also pretended to have no idea of the sexual history of her husband.

It was however detected that despite her sewing shop being adjacent her husband's photo studio, she appeared to have no knowledge of Offei's sexual exercises on Begoro women.

But who knows, maybe, she is feigning innocence to shield her and the family from blame.

Of the three, the last born who is a male is said to be a student in a polytechnic in the country, the other two older females are said to be doing well. Adomonline.com cannot confirm if they are married or not and the kind of work they do.

Elders of the local branch of the church [name withheld for now] denied knowing him as an elder. They however chose not to comment on whether Yaw Offei or 'photooo' is a choir leader of the church.

Twists and turns
Despite the sexual bouts being recorded privately and sometimes without the knowledge of the female characters, the pornographic videos and pictures are no longer existing on the laptop of only Offei, but also available in several homes and workplaces courtesy social media.

The Begoro police who are investigating the scandal are faced with the trouble of unraveling the mystery of how these videos were unleashed into the public domain.

Three schools of thought, each explaining beautifully how the videos were released, have emerged since the scandal broke.

The first school of thought tells of how a photo apprentice [name unknown] of Yaw Offei after 'catching' his master in action on more than three occasions finally maneuvered to get into the laptop of his master and get hold of the nude pictures and videos.

He was said to have blackmailed his master into paying GHC 1500 out of GHC 2000 he charged him to keep mute. Failure by his master to pay the remaining GHC 500 in spite of persistent calls on him to do so was said to have led to the apprentice circulating them.

It is also believed that the pornographic materials together with soft copies of wedding pictures of a couple were mistakenly copied onto a pen drive by Yaw Offei and delivered to the groom who demanded the soft copies of pictures he took at his wedding.

This school of thought says the groom after copying his pictures and that of Offei's sexual encounters started circulating to his friends.

The third school of thought has it that the photographer's laptop was sent for repairs after it developed a fault and it was the repairer who after discovering them gleefully circulated them.

Nevertheless the police, according to Maxwell Kudekor is investigating the case, with the first hurdle being unravelling the identity of the person circulating the pornographic materials and stopping its spread to avoid further chaos in the town.

Sections 280 and 281 of Ghana's Criminal Law qualify the circulation of pornographic materials as a criminal offence.

Racing with a Limping man
The ladies are not the only people fleeing the town but 'limping man' Yaw Offei as well whose current location remains unknown.

What is certain that he is not in town. The police claim they have no idea of his whereabouts.

Invoking Traditional powers
The Chief of Begoro and Benkumhene of Akim Abuakwa, Daasabre Awuah Kotoko II in an interview with Adom News condemned the videos and pledged to support the police in investigating it since the scandal is a criminal offence.

He said the elders of Begoro after receiving official complaints would also act and invoke the traditional powers where necessary.

But until the police and the chiefs act, Offei would remain in the history of Begoro with his victims forever living to curse the very day they came into contact with him.